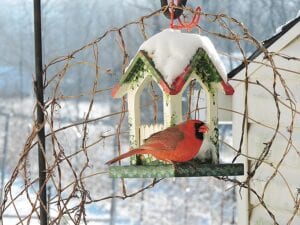 WINTER BEAUTY — A male cardinal feeds outside a window at the home of columnist Ike Adams. (Photo by Loretta Adams)

There’s a wide-open unroofed and unfloored extension off the exterior wall of our dining room that’s about eight feet square, give or take a few inches. Loretta calls it an alcove. The nicest thing I’ve ever called it is a hole in the wall.

When I used to mow the grass I called it a bunch of things, none of which can be mentioned in a family newspaper because it is virtually impossible to mow with conventional lawn care equipment.

One side covers an old cistern for a couple of feet in width, the opposite side is a concrete ramp, about four feet wide that leads down to the cellar door, and the middle is bare ground with a couple of old drainpipes sticking up.

As our house grew up over the last century, Loretta’s alcove simply grew around the open space. Suffice to say that it was not built there for its architectural beauty.

In 1999, when we bought the place, or, as I like to say, bought a skeleton and a hardwood floor and built a house around it, we installed a double-wide window in the dining room overlooking the “alcove”. It’s high enough above the floor that I don’t have to see, with much dread, how difficult it is to mow, and it shows off the landscape for more than a mile down the road.

As the seasons change, other than the front porch, it is consistently my favorite feature of the place during daylight hours. My desk is in one corner of the room and all I have to do is glance out that that big window to realize a sense of peace and serenity.

It is especially pleasing this time of year because Loretta hangs an array of bird feeders inside the alcove and our feathered friends flock to them in droves. I actually spend way more time gazing out the window this time of year than I do on the porch, but only because the weather freezes me back indoors. I’d have bird feeders in the front yard, too, if I could sit still long enough to enjoy them.

In the meantime, the ongoing show that takes place out the dining room window is better than anything I see on television, day or night. I’ve counted more than 20 species, several of which I can’t readily identify other than to know that they are some sort of sparrow or members of the finch family. I’ve seen as many as three dozen individual birds out there at one time, either on the feeders or perched among the branches of a nearby peach tree waiting their turn.

We have four large cardinals so friendly that they will often perch right up against the window glass. I am assuming that they are the same two mated pairs that nest in our front yard every year. Eight or 10 other, somewhat smaller, too-young-to-marry cardinals vie for feeding rights and they are sometimes all there at the same time.

Numerous Chickadees, nuthatches, phoebes, tufted titmouse, house wrens, bluebirds, blue jays, mourning doves, towhees, pine siskin, rose breasted grosbeak and the occasional cedar waxwing, downy woodpecker or errant robin will make the scene. That’s just the ones I’m naming off the top of my head while I try to get out a column that is way past deadline. I’m sure I could name half a dozen others if I took time and put my mind to it.

The cardinals and titmouse are easily my favorites. My least favorite is a despicable, devil-incarnate, mocking bird that often does his best to chase away every other bird in the vicinity even though he has already eaten as much as he can hold.

Eventually he tires out when he realizes that, despite his gluttonous greed, the show must go on.