Now’s your chance to meet the ghosts of Letcher County 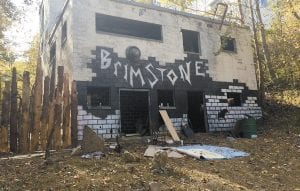 WHAT ARE THOSE SCREAMS — The old Whitesburg water treatment plant at the foot of School Hill in downtown is said to be the source of screams and voices coming from the old undergound water storage tanks. The building was being prpared Tuesday for a “haunted house” to be held there this weekend. (Eagle photo)

With autumn’s chill in the air and Halloween just around the corner, thoughts naturally turn to other chills – the kind one gets when someone is watching, or when the room ahead is just a little too dark to tell what that shape is.

Luckily for Letcher Countians, there are plenty of those kinds of chills to fill an October night around a bonfire.

The Appalachian Mountains can be spooky, with hollows so deep the sun only hits for a few hours each day, and fog that lingers among the trees until long into the day. And then there’s Kentucky’s traditional native name – The Dark and Bloody Ground. Not exactly sweetness and light. And don’t forget the Scotch-Irish traditions of little people, ghosts, goblins and the like, exemplified here by tales of women in white and tales of Raw Head and Bloody Bones to keep the children in at night.

Ghost stories abound in Letcher County. While many aren’t famous, almost everyone has his or her own tale of an eerie experience or a story passed down from parents or grandparents. A Facebook page called Appalachia’s Most Haunted has been collecting some of those stories for four years and posting them online. The page, run by Sam and Legina Adams of Isom, will bring some of those stories to life this month with a storytelling and murder ballad performance at Appalshop Theater Saturday (October 22), and a “Ghost Walk” around the downtown historic district October 29.

According to the Adamses, and to readers who participated in a survey on the page, Whitesburg would seem to be the most haunted place in the county, with more stories appearing here than anywhere else.

At Westwood, formerly known as Graveyard Hollow, cemeteries surround the community, with some graves nearly in the backyards of houses, and others in the edge of the street leading into the subdivision. The old Sandlick Cemetery, on the left side of Ohio Avenue, had its first burial in at least 1842, the year Whitesburg was founded, and during the Civil War, Confederate soldiers who died at a field hospital near where the Whitesburg Swimming Pool is now, were buried there. Confederate gravestones are lined up in perfect rows in the middle of the cemetery, and one of the commanders at Gettysburg, Col. L.H.N. Salyers, is buried on the opposite side of the hollow, under a marker with the unrepentant Confederate slogan “Deo Vindice,” Latin for “Vindicated by God.” The phrase also appeared on the seal of the Confederate States of America. Salyers’s son’s home is the Salyers House Bed and Breakfast on Hayes Street.

Residents claim to hear musket fire in the dead of night, and to have seen a full Confederate cavalry troop ride through the community on their ghostly horses. But not all of the ghosts residents tell of in Westwood are soldiers. At least two are young girls. One is said to knock on doors, then disappear before the residents’ eyes when they open the door. The other is supposedly a toddler, crying for her mother, and searching behind the tombstones trying to find her.

In downtown, there are numerous buildings reputed to be haunted, including the courthouse annex, which houses the sheriff ’s office, coroner’s office, water department, county television office, emergency management and Pine Mountain Search and Rescue. Several people have reported doors opening and closing by themselves, and at least three say they have seen the apparition of a child. Others say they have heard a whistled tune, voices, the jangling of keys, and seen a mop bucket propelled across the room with enough force to bang against the wall.

While the building was built in 1964 as The Letcher County Health Department, it was built on the site of the old jail, which was moved into the courthouse the year the new building was built. Several deaths and violent acts have been reported in the old jails, including both the stone jail built in 1907, and the log jail before it. Some of those have been documented, such as a death of Deputy Henry Day in 1905, who had seriously wounded a man while arresting him, and visited him every day in jail until Day suffered a heart attack at the prisoner’s side, and died before a doctor could arrive. In another, coal miner Leonard Wood, a black man accused of killing a white mine foreman at Dunham, was pulled out of the jail with a chain, dragged around the courthouse on the back of a car, then Lynch at Pound Gap in 1927.

The Courthouse itself is also reported to be haunted, perhaps by Floyd Frazier, the only man every hanged legally in Letcher County, and whose noose still resides in a locked cabinet in the courthouse. Police say they have seen what appears to be the shadow of a person outside the building, and in the windows upstairs late at night. The top floor also housed the jail before the renovations in 1998.

Some also believe old Floyd, and possibly others, are still sticking around College Hill, the site of the gallows from which he was hanged, where residents have reported the smell of wood smoke in their apartments, being pinched, being “helped” down their stairs, and having dishes fly out of cabinets and into the floor. An earlier resident of the apartment with the crashing dishes, claims to have seen a little boy appear and disappear in the bathroom.

City Hall, built as Lewis Wholesale in 1912 at the foot of the hill near where the gallows had stood two years before, has its own tales of disembodied voices, the sound of fire trucks starting by themselves when no one is near them, and a woman in a long white dress appearing on the second floor. The city had to secure the old water plant on the back side of School Hill because of teenagers trying to get in to listen to what many say are screams and voices coming from the old underground water storage tanks.

The most recent example of a ghost story, is a picture published on Appalachia’s Most Haunted last year purporting to show the transparent silhouette of a person standing behind a table on the top floor of the Harry M. Caudill Memorial Library. While some readers tagged the photo as an example of digital manipulation of “Photo Shopping,” the Adamses say they got the photo directly from the cell phone of the person who took it, and that it was in the middle of other pictures of the library. While they’re careful to avoid saying the photo is a ghost, they say it definitely wasn’t PhotoShopped, and they are at a loss to explain it.

While Whitesburg may be the most haunted place in the county according to Appalachia’s Most Haunted readers who completed an on-line survey, it’s not the only place in the county where resident relish in a Halloween chill, or even a mid-summer night’s chill, since the ghosts they have told about are seen, or heard, any time of the year.

Here’s a sampling of some stories of Appalachia’s Most Haunted has collected around Letcher County:

Blackey – Travelers along Highway 7 South say there is a certain abandoned house where a little ghostly little girl stands by the road and waves at travelers, just after dusk.

Jeremiah – People who grew up on Spring Branch heard tales of the Spring Branch Booger, or the Spring Branch Varmint, a black panther that could shape-shift into a headless woman dressed all in white. The Booger would scream in the mountains around Spring Branch, keeping errant children indoors at night. As if that weren’t enough, there’s the story of a preacher who while riding across the mountain from Spring Branch to Johnson’s Fork by mule at night, picked up an unexpected rider that weighed down the mule until it reach the top of the mountain, where the unseen rider disappeared, and the mule suddenly galloped back home at Johnson’s Fork.

Cowan – People who live at Cowan claim to have seen the ghosts of two little boys with fishing poles near the spot where they were killed by a car, and not far away, they say the same hitchhiking man meets their car twice as they round a curve near a cemetery and an abandoned house that is reputed to be haunted. Farther up the road, at Scuttlehole Gap, residents claim they see six ghostly orbs floating up the old wagon road. Residents say the lights are the ghosts of five little children and their mother, who murdered them and buried their bodies in a shallow grave at the gap, before her husband killed her and disappeared.

McRoberts – People who live in McRoberts talk about the click-click of high heels on the sidewalk when no one can be seen walking.

Jenkins – Some people claim they see a lantern swaying on the mountain near Raven Rock, attributed to a Confederate sentry who fell asleep and was executed by his fellow soldiers for dereliction of duty.

The Mullins Massacre is also a popular tale in that area, with many believing The Killing Rock, on the old trail between what is now Jenkins and Pound is haunted by the ghosts of those killed by Doc Taylor, also known as The Red Fox.

Anyone who would like to hear some of these stories in depth, may buy tickets for either the performance October 22, called Legends of a Mountain Hollow, or for Appalachia’s Most Haunted Ghost Walk 2016 on October 29. Tickets for Legends of a Mountain Hollow are $12 for adults, $9 for children 8-12, and free for children under 8. Tickets for the Ghost Walk are $15 for adults and $10 for children 8-12. Both can be purchased from Eventbrite.com, or by going to facebook.com/appalachiasmosthaunted and clicking the “Book Now” button.