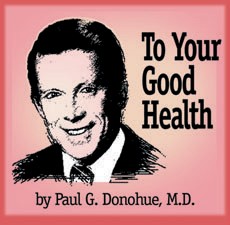 DEAR DR. DONOHUE: My wife, 78, has had headaches, some memory problems and confusion. A brain scan showed hydrocephalus. We were referred to a neurosurgeon, and he ordered an infusion study. We have waited six weeks for that appointment. At an earlier appointment, we met someone who had had the infusion study and then had a shunt placed. He said he got his life back. Someone else told us that 10 percent of people diagnosed with Alzheimer’s disease really have normal pressure hydrocephalus, which is fixable. What is your reaction to this? — J.R.

ANSWER: Dementia is a fog that descends on the brain, erasing memory and impairing many other mental functions. Alzheimer’s disease is the major cause of dementia. However, there are other causes, and one of them is normal pressure hydrocephalus. I can’t vouch for the statement that 10 percent of Alzheimer’s patients have NPH, but I am sure there are a few who do. I don’t want to raise false hopes for Alzheimer’s patients.

In NPH, the balance between the production and absorption of cerebrospinal fluid is lost. The volume of fluid within the brain increases and compresses it. That leads to the signs and symptoms of NPH.

The three major indicators of NPH are an abnormal walk, a diminution of memory and other mental functions (dementia) and an urgency to empty the bladder with frequent loss of bladder control. The NPH gait is one where steps are taken slowly, in short strides and with the legs wide apart. People look as though their feet are glued to the ground and they have difficulty turning themselves. A person doesn’t need all three criteria to merit the diagnosis.

If signs, symptoms and tests, including a brain scan and the infusion test your wife is going to have, point to normal pressure hydrocephalus, then drainage of the excess brain fluid often can restore a person’s life, as the man you met in the doctor’s office said. A thin, plastic tube (a shunt) drains the fluid to other body sites where it is absorbed.

Alzheimer’s disease is far and away the leading cause of dementia. The booklet on Alzheimer’s disease describes it and its treatments in detail. To order a copy, write to: Dr. Donohue — No. 903W, Box 536475, Orlando, FL 32853-6475. Enclose a check or money order (no cash) for $4.75 U.S./$6 Canada with the recipient’s printed name and address. Please allow four weeks for delivery.

DEAR DR. DONOHUE: When my son was 10, the doctor gave him a nasal spray to stop his bedwetting. It worked well. He told us to use it only when the boy was going to be away for the night. My son is now an adult and is 6 feet 8 inches tall. Did that inhaler make him grow so tall, a height that is uncomfortable for him? — B.P.

ANSWER: The medicine in the inhaler was a synthetic version of a pituitary gland hormone called antidiuretic hormone, a hormone that slows urine production. It has nothing to do with growth. I guess the world can be inhospitable to the very tall, but many of us wouldn’t mind trading places with them.

letters, but he will
incorporate them in his column