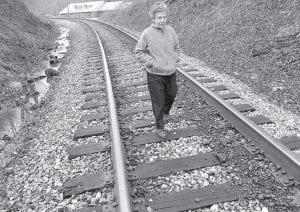 In this Friday, March 26, 2010 photo, Marie Cirillo walks through an old part of the Blue Diamond Coal Camp in Eagan, Tenn. Cirillo, a Brooklyn, N.Y. native, came to Appalachia 43 years ago to assist locals to help themselves get better educated and employed. (AP Photo/Amy Smotherman Burgess, Knoxville News Sentinel)

Marie Cirillo came to Appalachia 43 years ago to help educate locals and give them job skills after deciding she couldn’t do it as a Catholic nun in the Midwest.

“I saw (helping locals) as a new ministry for churches, particularly in Appalachia,” she said.

She’s not a lay leader or feminine theologian for any church. The former Sister Marie of Fatima of the Glenmary Sisters, who gets a retirement check from the Catholic Diocese of Knoxville, does her work for the people of Appalachia because she loves them.

In the Clearfork Valley area that has about 3,300 residents, she has poured time and spirit into projects that cannot be measured in dollars and cents. And it’s appreciated by those who have worked with her, either as summer volunteers or local residents.

“She’s a saint,” said Caroline Kennedy, who came here the summer of 1973 after her sophomore year of high school, working on a video project on the coal mining community and what it meant to the local people.

“She’s engaged in the world and the community. She has had an incredible career over time. She remains committed and is a tremendous inspiration,” Kennedy said in a phone interview from her New York City office.

The daughter of the late President John F. Kennedy and Jacqueline Kennedy Onassis was 15 -1/2 years old when she lived with Cirillo in a home in the Rose’s Creek area. She came with a high school friend, Allyson Riclitis.

Kennedy learned about Cirillo and the Clearfork Valley, in Campbell and Claiborne counties, through the Robert F. Kennedy Memorial Foundation established for her uncle. Cirillo had obtained a grant from the foundation for an oral history project on some coal projects and the people who remembered them, she said.

“When I first moved here, moonshiners were the only entrepreneurs in the community,” Cirillo recalled. “I’d get a little bottle of it. People who visited would want to drink moonshine mountain people made. I still have a little. I’ve had it at least 10 years. People don’t ask for it anymore.”

It’s been part of Cirillo’s mission to see that the people who live in Claiborne and Campbell counties east of Interstate 75 near the Kentucky border can use property that they have worked on and dedicated their lives to. This is done through the Woodland Community Land Trust, an agreement that Cirillo helped forge, which allows 450 acres to be made available with lifetime renewable leases for residents to build homes, grow gardens and establish businesses.

“The lifetime renewal leases require certain things: taking care of the land and taking care of each other. They have to spend two days a year working together. One year we replanted trees,” Cirillo said.

Whether it’s negotiating agreements, writing grants or handling a pick ax to help landscape the Clearfork Community Institute in Eagan, Cirillo is in the trenches. She is a prime moving force in the institute, a place for meetings, educational programs and social gatherings.

She doesn’t really like talking about herself or her years here. She calls herself a community developer because she believes that Appalachians living in a distressed place have a strong and lasting sense of community and focus their lives not on individual initiatives but on group actions.

Cirillo likes to focus on what she sees as continued needs: completing the Community Institute out of which she operates as a volunteer; helping the community focus on forest land and determine what timber and non-timber products can be created in a sustainable way; getting a maker of mobile homes that are energy efficient interested in building here; and locating a service station center that meets the particular needs of a rural community.

For example, Clayton Homes, which makes manufactured homes in Blount County, is the type of homebuilder she would like to see take an interest in the area, she said. Its i-house, unveiled in 2008, combines environmentally friendly features and modern design at an affordable price.

And she would like to see a travel center — like those that Knoxville-based Pilot Corp. has — consider a business in Eagan that would have a community laundry facility, a room for computers, an area for sales of local products and affordable gasoline prices, she said.

“The people pay the highest amount and use the most gas for where they want to go, such as a hospital in Knoxville or jobs in Oak Ridge,” she said.

So what brought the New Yorker here?

She and others in the Glenmary Order were working in the late 1960s in an area of Chicago crowded with 40,000 refugees from Appalachia when she became convinced migration to big industrial cities was not the way to solve the problem of the jobless mountain people. The women decided to come to Appalachia to help people on their own turf. They also decided they could do it better outside the Catholic church.

The women formed an organization called Federation of Communities in Service, or FOCIS. They began their work in Kentucky and Virginia as well as Tennessee.

Visitors usually arrange to meet Cirillo in the Cyber Cafe at the Clearfork Community Institute. The institute is symbolic of her efforts in many respects, both in terms of programs and money obtained for its renovation and use.

The institute, adjacent to the Clearfork River, formerly was a public school acquired through the Woodland Community Land Trust for a multiuse facility.

The building features classrooms that eventually will be used for offices and a display room, rooms for meetings or gatherings and a large deck looking out on the river. The upstairs will be used for music and storytelling.

The Bonner Foundation in Princeton, N.J., is among those that have supported the institute’s renovation. Other money has come in dribbles, including a $75,000 grant from the Appalachian Regional Commission in 2008.

The East Tennessee Community Design Center in Knoxville provided schematic plans for extensive renovation and landscaping of the facility.

“They are the type of organization we need to deal with. They’re interested in a sustainable community. The key word is community. This is not just a building. And we are the Community Design Center. They actually get stuff done,” said David Watson, ETCDC executive director.

After committing to use energy conservation and alternative technologies, the institute obtained an ARC grant, which has been used for a geothermal heating system, insulated exterior walls and double-paned windows. In addition, five area residents have been trained in new employable skills.

“Local people we hire are willing to spend some time training,” Cirillo said.

Living with Cirillo was like nothing the young Caroline Kennedy had ever experienced. Lessons learned from that time stay with her today.

“She was trying to bring change. Getting to know and bearing witness to history and to the current situation. She is always someone I admired,” Kennedy said.

Cirillo has kept up with Kennedy. She attended her wedding to Edwin Schlossberg in 1986 and visited in their home after Rose Kennedy Schlossberg, the first of their three children, was born in 1988.

“She is one of the more powerful inspirations to me outside my family, making faith real and visible to make people’s lives better,” Kennedy said.