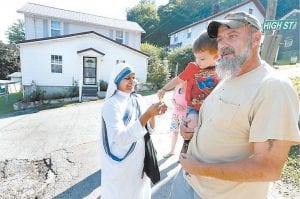 Sister Suma Rani gave a piece of candy to 2-year-old Randon Phillips, held by his grandfather Randall Phillips, who was talking to Sister Dominga outside the Missionaries of Charity convent in Jenkins. In the background, Vicky Philips, Randall’s wife and Randon’s grandmother, talked to Sister Imeldina. Mother Teresa opened the mission in 1982. (Photo by Charles Bertram, courtesy Lexington Herald-Leader)

“She got her up and prayed for her,” Branham said. “She picked her up in her arms.”

Sabrina Branham, now 43, has Down Syndrome and does not speak. Her mother, 83, takes care of her in the home they share at Jenkins.

Decades later, nuns from the order Mother Teresa established, the Missionaries of Charity, are still paying them regular visits.

Mother Teresa visited Letcher County in 1982, in recognition of the opening of her order’s first rural convent, and again in 1988.

“Let us love one another as Christ loves us,” she told those who gathered for an outdoor Mass during her first visit to Jenkins in Letcher County, near the Virginia border. “The greatest gift of love we can give one another is to grow in God’s love.”

Mother Teresa, who lived most of her life working among the poor in Calcutta, India, died in 1997 and was canonized as a saint in the Catholic Church on Sunday at the Vatican. 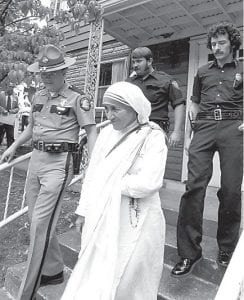 Officers with the Kentucky State Police and Jenkins City Police escorted Mother Teresa during her 1982 visit to Jenkins, where a convent she opened then remains vital today. (Photo by Charles Bertram, courtesy Lexington Herald-Leader)

In the years since her death, the Missionaries of Charity have carried on her work of serving the poor, the sick and the aging in Jenkins.

The nuns are the only regular visitors some members of the community get.

“No one comes to see them,” said Sister Imeldina, who has worked in Jenkins for three years.

“If they will allow us,” she said the sisters do housework such as washing dishes and cleaning floors for older people for whom those tasks are difficult.

On Aug. 30, she and Sister Suma Rani made visits to two families in their neighborhood.

Sister Suma Rani grasped the steering wheel of the aging sport utility vehicle the four nuns share, a rosary wrapped around her hand as she navigated steep mountain roads.

“When we hold the rosary, we are holding the Blessed Mother’s hand, and she’s holding ours,” she said. 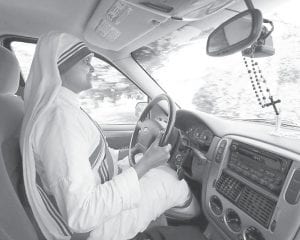 During a visit with the Branhams, Sister Suma Rani played with Sabrina, while Sister Imeldina talked with Dina, asking with concern about a skin cancer recently removed from her temple.

Before they left, the nuns prayed with the mother and daughter and tried to arrange for a relative to stay with Sabrina so that Dina could attend an upcoming picnic the nuns are holding at the church hall for “shut-ins,” people who are rarely able to get out to socialize with others.

“She has to be out of the house sometime,” Sister Imeldina said.

Dina Branham said her daughter loves the visits from the women.

The four nuns from India who work in Jenkins live simply, without modern conveniences such as cell phones, television or air conditioning.

Their personal belongings are few.

Each has three white saris like those Mother Teresa wore, two for every-day use and a better one for special days. There is no washer and dryer at the convent — the nuns wash in five-gallon buckets and line dry. The cloth of their simple habits is made by lepers in India, with three blue stripes representing their vows of poverty, chastity and obedience, as well as free service to the poorest of the poor.

The Missionaries of Charity convent in Jenkins is unique in that most of the order’s American houses are in urban areas such as New York, San Francisco and Washington, D.C.

“For me it’s the people I look on, not the place,” Mother Teresa told reporters when the house was opened. “It is not the numbers. In Calcutta it may be thousands; here it may be two people.”

On a recent morning, as the nuns gathered in the convent’s small chapel, fog hung over the mountains, and the only sounds were crickets, the crow of a rooster and the whir of an oscillating fan.

A portrait of Mother Teresa smiled down on the group as they began to pray, their faces echoing the joy so often described as radiating from the tiny Nobel Prize winner.

“The rosary is meant to be a prayer of the whole person,” explained Sister Dominga, who was visiting from Atlanta. “You’re contemplating. In your heart you want to open yourself to the love of Jesus, the love of God.”

She said that while the words of the prayers are said aloud in unison, “what is going on inside is going to be different” for each person.

The prayers that punctuate their days are the spiritual fuel that gives the sisters strength for their work.

In the summer, they host a day camp for the children of the community.

Once a month, they distribute bags of food to the community, along with paper necessities such as toilet tissue.

At Thanksgiving, they hand out turkeys.

The house across the street, where the nuns lived when the Cove Road convent first opened, now serves as a shelter when needed.

Typical days include about six hours of visiting with the sick and needy.

Among those who received a visit from the sisters last week were Carol and Roy Church.

Roy has a number of health problems and is recovering from recent foot surgery. As he reclined on a small bed in the front room of their home, Sister Suma Rani took a peek at his dressings.

“Time to cut,” she told Carol Church, pointing to the long nail on Roy’s big toe. “Be careful.”

They chatted about how each member of the family was doing, the coyotes that howl at night and the bear that ambled across the family’s front yard.

The nuns offered a bit of advice about a struggling teenager and, before they left, they prayed.

She said the nuns have given them food, helped get repairs made to their ceiling and floor and cared for their children at their summer Bible camp.

“They have done so much for us,” she said. “They do for everybody around here.”