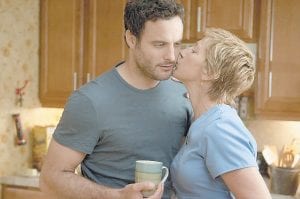 Edie Falco has performed the near impossible: She has made a clean break with the show that made her a star yet could have pegged her for a lifetime as mobster wife Carmela Soprano.

In the title role of “Nurse Jackie,” Falco has ably recast herself as a guardian angel with a cranky attitude, a bad back and a penchant for cheating on her husband with the guy who supplies her with pain pills.

Now, that was Carmela who?

At the end of last season, Jackie Peyton’s unsteady world seemed to be blowing up. Her loyal but running-out-of-patience husband (Dominic Fumusa) had discovered her latest deception.

“I keep telling you I’m no prize, and you won’t listen,” she confessed.

“Is that everything?” he asked her as she hugged him.

But it’s not everything.

Back for a third season (it debuted Monday at 10 p.m. on Showtime and airs again Wednesday at 8:30 p.m., and Thursday at 10 p.m.), Jackie, with her emergencyroom scrubs, pixie haircut and caustic manner, resumes her hectic life of juggling lies.

“Anyone who knows you knows they don’t know you,” as the hospital pharmacist (Paul Schulze) who is Jackie’s source for drugs and on-the-job quickies once told her.

“I don’t know that I ever really feel like I’m getting my arms around the character,” Falco says. “But I think that’s why I want to do it. What ends up getting on film is my attempts to get my arms around an idea of who this woman is.”

When it premiered two years ago, “Nurse Jackie” became an instant hit for Showtime. Viewers were hooked on this dark comedy about a woman who is fiercely dedicated to healing her patients while no less resolute, it seems, on damaging herself and others in her path. (Last season the role brought Falco an Emmy for best actress in a comedy series, adding to her stash of three Emmys for “The Sopranos.”)

Much of Jackie’s struggle stems from her addiction.

It’s a plight that’s familiar to Falco, who, even though she has been sober for two decades, has made good use of her experience with alcohol abuse in playing Jackie.

“For sure, it’s helped me understand her in a way non-addicts never could,” Falco says. “But I’m 20 years away from that, so it doesn’t feel dangerous to me, or titillating, to play someone (who isn’t sober). Every day, I have a deeper gratitude for the fact that I’m not there anymore.”

The show never glamorizes drugs as recreational. Jackie is masking pain from an on-the-job back injury and her barely manageable life. “Nurse Jackie,” for all its quirkiness and extreme humor, is a cautionary tale, even though a few of its viewers may not be getting the message.

“Some guy on the subway called out to me, ‘Oh! Nurse Jackie! YOU do the same drugs WE do!’ and had this fist-pumping thing going on,” Falco reports. “I thought, ‘That’s not what I’m going for.’

“ Hopefully, there are people who can see past that, to something deeper.”

And Falco wants them to keep seeing it.

“I’m thrilled to be doing this job, and I’d love to do it for a long, long time. This is far beyond my wildest dreams — the life that I have now,” she says, explaining further with a laugh, “I’ve also been in therapy for more than 20 years.”

Besides “The Sopranos,” the 47-year-old Falco’s previous TV work includes the HBO prison drama, “Oz.” Her films include “Judy Berlin,” ‘’Sunshine State” and “ Freedomland.” She will add to her extensive theater credits when previews begin April 4 for the Broadway revival of John Guare’s comedy “The House of Blue Leaves,” in which Falco co-stars with Ben Stiller, Jennifer Jason Leigh and Mary Beth Hurt.

Production on “Nurse Jackie” has wrapped for Season 3, so Falco knows what lies ahead. But while she was filming, she insisted on never being told more than was necessary, episode by episode.

“I really need to take it as it comes,” she says. “I prefer to find out at the last minute, and go with whatever comes right away. I love not knowing.”

And though Jackie seems to regularly court disaster at her job, in her marriage and her personal condition, the series makes plain she’s still got room to fall. In a future episode, Jackie asks a self-professed expert in drug abuse, “Hypothetically, how far am I from hitting bottom?”

To that, the man smirks knowingly and answers, “Not even close.”

During her interview, Falco marvels at how long some addicts can abuse and delude themselves, “how low-down some individuals can get before they either die or clean themselves up.”

For storytellers, that’s a good thing.

“ It means we have no rules, no boundaries on what Jackie might do,” Falco says. “Absolutely anything could happen.”

But in the end, there’ll be no waffling on Jackie’s fate.

“It’s important to me,” says Falco, “that whatever the culmination of the show may be, and whenever it occurs, she’ll either fall apart or she’ll fix this.”

Showtime is owned by CBS Corp.