Nurse Jackie wakes up to find troubles closing in 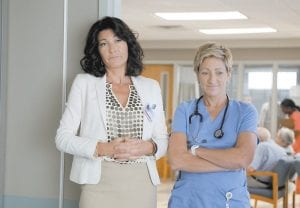 Nurse Jackie Peyton was passed out from a hit of morphine when we last saw her, an attempt at a momentary escape from life’s troubles.

The second season of Showtime’s “Nurse Jackie” premiered Monday at 10 p.m. (with repeat episodes scheduled for Wednesday at 8 p.m., Thursday at 11 p.m., at Friday at 9 p.m. Repeat episodes also run on Saturday and Sunday.)

Edie Falco’s title character has, shall we say, a few flaws: She is addicted to drugs, cheats on her husband with her supplier and is willing to bend hospital rules if they suit her way of doing her job.

Despite these blemishes, Jackie is a sympathetic and popular character, even with real nurses concerned about the portrayal of their professional before the series even started. As it turned out, “Nurse Jackie” was the most-watched new series in Showtime’s history when it debuted in June 2009.

“People really responded to the character having compassion and a commitment to helping the vulnerable in the world, the vulnerability she comes across every day,” Richie Jackson, an executive producer of the series and Falco’s manager, says. “Even when she can’t take care of herself, she’s committed to taking care of other people.”

“Nurse Jackie” got its start through one of those situations actors usually consider a nightmare: Somebody passed along a script written by a friend of a friend and asked if something could be done about it. This script actually had promise. Called “Nurse Mona,” it was a very dark story with even some supernatural elements.

Falco liked the character but not the tone. Showtime brought in Liz Brixius and Linda Wallem for a rewrite and it became what it is today, a serial drama with comic elements.

Some humor is necessary for people who work in emergency rooms, Jackson says, “because otherwise you will cry all day long.”

The tone wasn’t necessarily easy to master at first for the actors. Falco says it’s been much better for the second season.

“We’ve sort of grown more comfortable with its complicated tone,” she says. “For me, personally, it doesn’t seem to fit completely into any category. What happens is we have a confidence about it that maybe wasn’t there in the first year. I’ll speak for myself, but in the first year I didn’t know. Is this a comedy? Is this a drama? Should we be trying to be more funny or more serious? All I know is, if we follow whatever the nonformula was the first year, we’ll be all right.”

Life doesn’t get much easier for Jackie during the second season, with money troubles, family troubles and the drugs.

“It’s going to be a slow burn for all of her secrets to be revealed and all of the balls she’s juggled to fall,” Jackson says. “We hope to be on the air for a long time and we can’t make them all fall at the same time.”

One story line decidedly doesn’t ring true, however. We won’t give too much away, but it involves a relationship between Jackie’s husband and her drugdispensing lover.

Falco says she’s had several real nurses approach her to thank her for the portrayal of Jackie. She can’t imagine doing that job, seeing how difficult it is.

She also doesn’t mind the people who don’t appreciate seeing a nurse on television with such problems.

“I come from 10 years of this other show where we had that all the time,” she says, referring to “The Sopranos,” the former HBO superhit.

“If people are talking about a show, somebody is going to pipe up and say why it’s no good. It’s just all human nature. I’m all for everybody’s input. I don’t have to agree with it.”

With “Nurse Jackie,” the former Carmela Soprano has done more than any other actor on “The Sopranos” to establish herself in another memorable character. She and Jackson said that wasn’t something they really thought about; they were just looking for good scripts.

It also doesn’t mean she’s abandoned Carmela, should “The Sopranos” creator David Chase ever want to revisit the story in some way.

“Oh, my God, I’d do it in a heartbeat,” Falco says. “Absolutely. It was the most spectacular chapter in my life.”