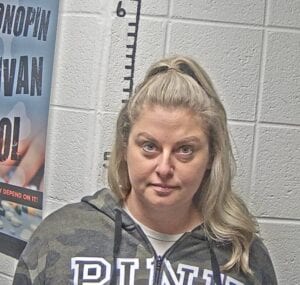 A nurse practitioner charged with multiple counts related to an alleged sexual relationship with a 16-year-old boy has been arrested.

Carrie R. Hall, 41, of Dry Fork, was arrested Friday morning along with Lenville “Lennie” Bates, 46, of Thornton, who was indicted on charges of complicity with Hall to bribe or intimidate a witness, tamper with a witness , and tamper with physical evidence.

In addition to the same complicity charges with which Bates was charged, Hall is charged with multiple counts of first-degree sexual abuse, third-degree rape, use of an electronic device to induce a minor to engage in sexual or prohibited activities, viewing/possession of matter portraying a minor in a sexual performance, use of a minor under 18 years old in a sexual performance and tampering with a witness. She is also charged with one count of sodomy.

Hall was placed in the Letcher County Jail in lieu of a $250,000 cash bond. If she were to post that bond, she would be required to have an electronic monitoring bracelet, and remain under home incarceration, as well as standard restrictions such as no contact with the victim or witnesses.