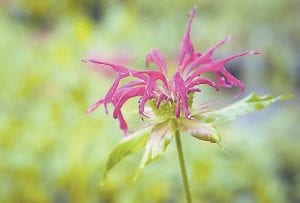 A specific type of bee balm, Rebecca’s pink, is in bloom at Enchanter’s Garden Native Plant Nursery in Hinton, W.Va. Also found in bloom now amongst an older forest bed at the nursery are a Ramp plant (left) and an Appalachian cup plant. (Photos by Michael Shroyer/ Special to The Roanoke Times.)

If you want to visit Enchanter’s Garden Native Plant Nursery, be sure to call ahead to fix a time.

Because if you meet another vehicle on the rocky, half-milelong, one-lane driveway that leads there, somebody will have to back up to where they started. With a steep, eroding cut bank on one side and a close drop-off on the other, that’s not a savory prospect.

But upon arriving at the top of the road, the land opens up to a nursery with a greenhouse full of wild and a few rare plants, and a business that is itself an uncommon species in the southeastern U.S .

Self-taught native plant expert Peter Heus and his wife, Andy Klopp, founded Enchanter’s Garden on about six acres of their 200-acre homestead in 1994 and operated it until Heus retired in March. Ian and Elizabeth Caton moved to West Virginia from Philadelphia to take over.

Today the nursery offers at least 200 varieties of native and wild plants propagated from seeds or cuttings taken from ditches, slopes and river banks on public and private (with permission) lands around the region. 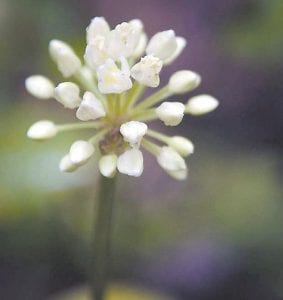 Now it is the Catons who staff the Enchanter’s Garden table for a few summer Saturdays at the Blacksburg Farmers Market, and at other markets and festivals where for many years Heus and Klopp were familiar faces.

“We just want to have fun, make a little money and enjoy our lives, basically,” Ian Caton said. The goal is to “not make this place a burden on our nerves.”

That desire to simplify looked to be in full flower on a recent Tuesday, when Elizabeth Caton was out back of the greenhouse, elbow deep in pine bark mulch with a cat lazing beside her.

All the plants offered by Enchanter’s Garden are native to the eastern U.S., and most are native to Virginia and West Virginia. But Caton said the business subspecializes in plants that grow on what are known as shale barrens. 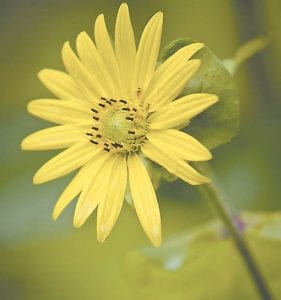 problem, Caton said. For much of their recent past, Appalachian forests were shaped as much by fire as by water. Native plants in the eastern woodlands evolved with regular forest fires caused by lightning and intentional fires set by generations of American Indians to clear and maintain meadows that attracted game and made way for farming. Without fire, some native plant species can’t thrive, Caton said. For this reason, Heus and Caton do controlled burns on the nursery property. You have to go back about 200 years to find widespread demand for native nursery plants. Imported species became big business in Victorian times, with explorers risking their lives in jungles and forests of Asia and South America, among other lands, to find the next exotic flower. Love for these showy imported cultivars continues today. But about 40 years ago, Caton said, interest in native nursery plants began to grow, and then to spread. In fact, some states have begun banning the importation and sale of some non-native species popular in landscaping. Such bans exist in the northeast on plants such as burning bush, Norway maple and Japanese barberry, among others. Unlike in the northeast and the west, however, the popularity of native plant landscaping has been slow to take root in the Southeast . Caton said Enchanter’s Garden is one of about a half-dozen native plant nurseries operating in West Virginia. And “southern Virginia has been seen as kind of a native plant desert,” said Doug Tallamy, a University of Delaware entomology

Near the greenhouse’s grassy parking area sits a mysterious plant that is not for sale.

“I hope someone who comes and sees it will know what it is,” Caton said.

Because neither he, nor Heus, who discovered it on a shale barren about six years ago, know exactly what it is. They’re sure it’s a species of bee balm, but as far as they can tell it’s heretofore remained undescribed by botanists.

This, too, is part of the Enchanter’s Garden mission: to find and preserve the waning biodiversity of the southern Appalachians.

Invasive species such as the hemlock wooly adelgid have already begun to change eastern forests, killing swaths of native trees. In their place, invasive plant species can thrive.

Simply preserving land is not a guarantee of saving natural ecologies, Caton said.

Heus and Caton battle introduced species like tree of heaven and garlic mustard. Overpopulation of white-tailed deer is also a problem. In great numbers the native herbivore can damage native plant colonies in the forest and on the nursery grounds.

A century of fire suppression in the eastern forests is another professor and author of “Bringing Nature Home,” a book about the importance of native plant landscaping.

“We have come to see plants as decorations and forgotten all the biological services they provide us,” Tallamy said.

Some homeowners may rejoice when they find an ornamental plant labeled “pest free,” but Tallamy said it’s not a blessing.

“Nothing can eat them,” Tallamy said. “The problem comes in how the plants affect the food webs. All energy that drives animal life is fueled by plants.”

Today about 80 percent of the plants in our landscape come from Asia, and native insects can’t eat them.

“In a few places, that’s OK. But we do it everywhere. And you see collapse of species,” Tallamy said.

It takes up to 9,000 native caterpillars to raise one clutch of Carolina chickadee young. Without native trees and plants to feed the caterpillars, the birds go hungry.

“Across North America, migrant bird species are in steep decline,” Tallamy said. “Today we have 50 percent fewer birds than we did just 40 years ago.”

“I encourage people to live with nature instead of the old method of us over here and nature over there,” Tallamy said. “That used to be OK because there was a lot of nature over there. But the balance has shifted, and we have less nature.

“Now we need to integrate it more into our lives to keep ecosystems functioning,” Tallamy said.

Landscaping with native plants may be one way to help reverse that trend.

No doubt the indigenous people who lived or passed through the mountains hundreds, perhaps even thousands, of years ago would recognize some of the plants growing in the greenhouse and would know uses for them.

It is ironic that a nursery dedicated to preserving native plants was started nearly 20 years ago by Heus, himself a Long Island import, and will be carried on by Elizabeth and Ian Caton, transplanted from Arkansas and Pennsylvania, respectively.

Like the pockets of native prairie flowers Caton says can be found hidden away in these mountains from ice ages past, it depends upon how you define native.

How long does it take for a plant – or a family, or a people – to naturalize in a place?

Ian Caton said he realized as a young man that life in a cubicle wouldn’t suit him. After studying horticulture and environmental design, Caton said, he worked for about 12 years at Pennsylvania based Larry Weaner Landscape Associates.

Caton said he got to know Heus at native plant conferences. When Heus decided to retire, he asked if the Catons would pay $1 and promise to keep the nursery going.

For the Catons, it was the right time to slow down.