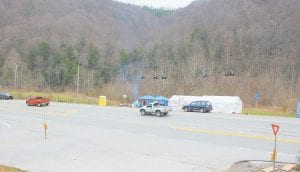 Registered
nurses who have been striking against Applachian Regional Healthcare hospitals in Whitesburg and eight other locations are expected to begin returning to work the day after Christmas.

taken down Sunday, the day after striking nurses here voted 35-4 to approve a new contract with Appalachian Regional Healthcare. The nurses expect to begin going back to work at ARH hospitals here and in eight other locations on December 26. (Photo by Chris Anderson) The
strike against ARH in eastern Kentucky and West Virginia ended Saturday night
when nurses voted to ratify a new contract. The contract, which expires in 2011,
was approved by nurses in Whitesburg by a margin of 35-4.

The approval ended a nearly three-month strike that forced some layoffs and brought financial hardship to ARH, which operates nine hospitals in the two states.

More than 600 of the hospital system’s 750 registered nurses walked off the job on Oct. 1 and about 500 remained on strike before a tentative agreement was reached on Dec. 20.

“I think it’s been 83 days. It’s been a long time, much longer than we ever anticipated,” said Pat Tanner, the lead negotiator for the nurses. “But it’s time to go back, I hope we can work together to rebuild the organization.”

“We left no nurse behind,” Tanner told the Register-Herald of Beckley, W.Va.

“We are pleased that our nurses have accepted this contract that includes an excellent compensation and benefit package,” ARH President and CEO Jerry W. Haynes said in a statement after the vote. “This is not only a vote in favor of a very good contract, it is a vote for quality patient care and improving the health and well being of all the communities we serve. We know that our nurses and our communities are as glad as management that this strike is over.”

“That’s happening all over the country,” Tanner said.

The strike caused a rift among the nurses, with dozens staying behind from the first day and more than 100 others crossing the line as weeks went by without a paycheck.

The nurses on strike maintain that the dispute was never about salaries. They say staffing levels were spread too thin to ensure adequate patient care and mandatory overtime had become the norm.

Tanner said that if the replacement nurses were to stay with ARH hospitals, they would be required to join the union.

The strike also took a financial toll on at least two hospitals, forcing dozens of layoffs and one unit to close. ARH officials said some patients were refusing to cross the picket line, causing a drop in revenue.

“This vote is the best thing that could happen to ARH, the nurses and the community,” Tanner said. “We hope that this will help the hospitals’ viability, open closed units and contribute to quality care.”

Kentucky Governor Steve Beshear joined West Virginia Governor Joe Manchin in expressing gratitude that the nurses will return to work. On December 6, Beshear and Manchin offered a proposal to help both sides reach an agreement.

“I am pleased that an agreement was made and patient care in eastern Kentucky can again begin to take precedence over contract disputes,” said Beshear. “We were very concerned about the impact this dispute would have on the health of eastern Kentuckians. (The) vote illustrates that the majority of nurses supported coming back to work. This positive outcome is in the best interest of all concerned.”

“I am so pleased that they were able to come back to the table and reach an agreement that gets our nurses back to work, and enables ARH to continue providing quality health care for southern West Virginia,” said Manchin. “This is truly good news, particularly at this time of year. I speak for so many people in West Virginia when I say we are so glad this has ended with a positive outcome. It just shows what can happen when people continue to try and work together on their differences.”