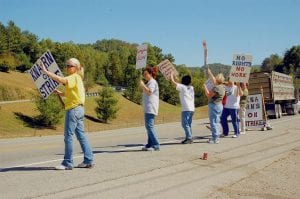 The senior member of the Letcher Fiscal Court said the county’s governing body may meet soon to voice its support for registered nurses who are on strike against Appalachian Regional Healthcare.

District Five Magistrate Wayne Fleming said last Monday that he would be surprised if the fiscal court doesn’t meet soon to pass a resolution supporting members of the Kentucky Nurses Association who walked off their jobs early Monday at the Whitesburg ARH.

“I support them just as much as I do the Steelworkers,” Fleming said in reference to the court’s decision to support other hospital employees who were on strike for three week earlier this year. “I don’t know a member on (the fiscal court) that won’t back them.”

Another 130 nurses (including a reported 17 at Whitesburg) declined to strike and showed up for work, ARH spokeswoman Candace Elkins said.

The action came after weeks of contract negotiations with the health system failed. The contract expired Monday.

ARH proposed last week a contract that promised an initial 2 percent pay raise – which would increase to 3 percent over four years – and flexible schedules that would allow nurses to choose either 10- or 12-hour shifts.

ARH says it pays its registered nurses between $40,000 and “well over $60,000.” The company said it provides the nurses with benefits worth an average of $13,500 a year and “free health care at ARH facilities.”

“They’re not really after money,” said Fleming, who met with some of the nurses Monday on one of two picket lines in Whitesburg. “They’re after freedom from being worked to death.”

When members of the United Steelworkers union went on strike against ARH in April, the Letcher Fiscal Court voted unanimously to adopt a resolution to denounce ARH’s hiring of replacement workers to substitute for the then-striking technicians, licensed practical nurses, aides, and physical plant employees.

“The RN’s want us to do the same thing for them we did for the Steelworkers,” Fleming said. “I’m backig them 100 percent and I’m sure the fiscal court will endorse them also. I think we can get that done this week.”

In Hazard on Monday, about two dozen nurses stood along the street outside the ARH hospital holding signs that read, “Every patient deserves a nurse!” and “We demand safe staffing.” Hazard, ARH’s flagship hospital, has 210 union nurses.

“It’s not about money. … They don’t want to staff to meet the patients’ needs,” said Wilma Maggard, a 14-year veteran at ARH.

Throughout the morning, vans carrying nurses from temporary agencies brought nurses into the hospital.

“Really, business is as usual,” he said, adding that the company is hiring permanent replacements for the positions left open by the striking nurses. ARH officials declined to give the number of openings.

ARH officials also declined to say how many replacements they brought in because of the strike and how much they’ve spent on their contingency plan.

“Our main focus is caring for our patients,” Elkins said.

Anita Jones, a 31-year veteran at the Hazard hospital, said most nurses work 16-hour days due to understaffing and mandatory overtime. Jones said that if ARH is able to replace union nurses, they should have offered more staffing during contract negotiations.

“Our thing is if they have so much staffing right now, why wasn’t it in place when we were unsafely staffed?” she said.

Maggard said the company should return to negotiations.

“I believe the company is going to lose a lot of good people because of this,” she said.

Elkins, however, said ARH had no plans to return to contract talks after nurses rejected the offer last week.

“It’s a highly competitive package,” she said. “Our nurses are well-compensated.”

Elkins said much of the mandatory overtime nurses work is to compensate for others who didn’t show up to work, citing sickness or personal reasons.

“The excessive abuse of callins, it causes staffing problems,” she said.

Magistrate Fleming said he believes the staffing problems are caused because ARH “simply doesn’t want to have to hire enough people.”

Information used in this report was also gathered by The Associated Press.