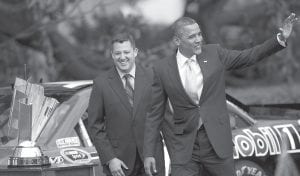 President Barack Obama, right, walked with NASCAR Sprint Cup Series champion Tony Stewart during an event to honor him and the other 2011 Sprint Cup Series drivers at the White House on Tuesday in Washington. (AP Photo/Evan Vucci)

President Barack Obama praised NASCAR Sprint Cup champion Tony Stewart on Tuesday for “one of the most dramatic finishes that we have ever seen.”

Obama welcomed Stewart and other top 11 NASCAR drivers to the White House to celebrate Stewart’s come- from- behind championship, his third title. The president noted Stewart nearly wrote off the season during the summer but charged back to win five races in the post-season and edge Carl Edwards.

Stewart and Edwards tied in the final Sprint Cup Series standings, but Stewart won the title based on his five victories. Obama credited Edwards for handling “disappointment with grace and class.”

Obama got to admire red and black versions of Stewart’s No. 14 Chevrolet Impala. The president says “every year I try to take a lap. Nobody lets me do it.”

“It’s good to see No. 14 back on the South Lawn,” Obama said. “Every year, I try to take a lap. Nobody lets me do it. But I am still holding out hope that at some point, I’m going to be able to get behind the wheel.” 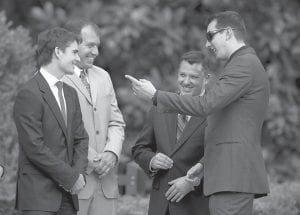 Tony Stewart , third from left, talked with, from left, Jeff Gordon, Ryan Newman, and Kyle Busch after the event at the White House on Tuesday. (AP Photo/Evan Vucci)

Despite the president’s high hopes, the commander in chief did not climb into one of Stewart-Haas Racing’s 800-horsepower Chevrolets. But it didn’t stop Obama from offering high praise for Stewart’s accomplishments in closing out his third title in the 2011 Chase for the Sprint Cup.

“This was Tony’s year,” Obama said, “and Smoke gave us one of the most dramatic finishes that we’ve ever seen.”

Stewart said he was humbled by the president’s remarks, but for his part, he wasn’t quite willing to play the accomplice in getting Obama behind the wheel of one of his cars.

“That’s what I was worried about when he went over to it and was looking. That’s why I never took the window net down,” Stewart said. “I can imagine Secret Service coming out of the woodwork as soon as we put him in that car. So yeah, I think that would be something he’d be genuinely interested in.

“He mentioned how nice a job we did at not tearing the lawn up. I don’t think it would remain that way if he was driving the car. But, it’s your yard, so …”

Stewart was joined at the White House by the other 11 drivers in last year’s Chase field. In his remarks, Obama singled out the unprecedented five-year reign of former champion Jimmie Johnson and gave credit to 2011 runner-up Carl Edwards, a member of his Presidential Fitness Council.

While it was not the first White House visit for Stewart as NASCAR’s reigning champion, he said the experience of being in the heart of the nation’s capital with dignitaries never gets old, especially since it was his first title since 2005.

“We got to do this twice as a champion before this, luckily, but it was kind of the same show for the last five years with Jimmie,” Stewart joked. “Like I say, it’s not only an honor to be here, but it’s the first time that we’ve been here and had the other drivers with us winning the championship.”

Obama also took time out to make mention of the NASCAR Unites – America Salutes initiative for patriotism and military support.

“One thing especially I want to thank NASCAR for is the support that you guys have provided to our men and women in uniform,” Obama said. “You give active duty soldiers, wounded warriors, veterans all a VIP experience at races.”

That mention wasn’t lost on Dale Earnhardt Jr., who currently sports sponsorship for the National Guard and whose car was on The Ellipse near the National Mall with a special red, white and blue paint scheme for the annual White House Easter Egg Roll last week.

Earnhardt, who called the experience of being on stage with the president “surreal,” said that he’s proud to be a part of the patriotic salute, especially with Memorial Day and Independence Day on the horizon. On Tuesday, though, the day belonged to the privilege of being a special guest in the president’s home.

Compiled from AP and NASCAR releases.