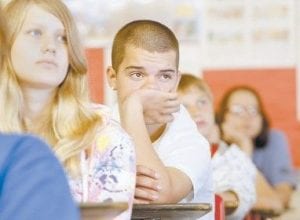 Most students in the Letcher County school system watched Tuesday as President Barack Obama delivered a speech urging them to study hard and stay in school.

Letcher County Schools Supt. Anna Craft said Obama’s speech to students was shown in several classrooms across the district on Tuesday with no problems.

“It was an historic event in that a president desired to be able to speak to all students in an attempt to motivate all students to excel in school,” said Craft.

Students across the country, including 12-year-old Mileena Rodriguez of Philadelphia, were reminded by Obama that hard work can take you places.

Mileena watched the address along with several of her classmates at Thurgood Marshall Elementary School and students across the country. For all the hubbub among adults over the backto school speech, many youngsters took the president’s message to heart.

“He said that we’re the future, and he’s right,” said Mileena, who wants to be a forensic scientist. “That’s a president telling you, ‘I care about you getting your education.’ Just imagine what kids like us can do if we actually listen.”

Schoolchildren from coast to coast watched on classroom TVs and computer screens. Others did not hear the message at all, either because their parents pulled from them from class or their schools refused to carry the speech over complaints from conservative groups and others that it smacked of political indoctrination.

Craft said showing the speech was a teacher choice and then a student choice, with only one child opting out. Craft said most fourth through 12th grade classes watched the speech and some younger grades also tuned in to hear the president speak.

In his speech, which aired on C-SPAN and the White House Web site, Obama used examples from his own life to urge students to study hard. He told them to stop chasing dreams of being athletes or reality TV stars.

“The truth is, being successful is hard. You won’t love every subject you study. You won’t click with every teacher. Not every homework assignment will seem completely relevant to your life right this minute. And you won’t necessarily succeed at everything the first time you try,” Obama said.

Other presidents, including Republicans Ronald Reagan and George H.W. Bush, delivered similar speeches to students, but some conservatives accused Obama of trying to promote his policies, and they urged schools and parents to boycott the address. Florida Republican Party chairman Jim Greer initially called the speech an attempt to “spread President Obama’s socialist ideology.”

The Department of Education was also criticized for proposed lesson plans distributed to accompany the speech, including a section — later changed — that asked students to write about how they could help the president.

Schools were not required to show the speech, and the White House posted an advance transcript on its Web site on Monday. After they got a look at the text, many critics, including Greer, backed off, and some schools agreed to show the speech after all.

Still, others were glad they kept their kids out of class.

“They don’t need to be told by the president what their responsibilities are. It’s the parents’ responsibility to teach them that, not the government,” said Ryan Christensen, a carpet cleaner who asked that his 10-year-old daughter be pulled from a fifth-grade class watching the speech in Caldwell, Idaho.

In Marietta, Ga., the elementary school that Mollie Cushing’s two daughters attend chose not to air the president’s address. And that was just fine with Cushing.

“We’re not really happy with the way the country is right now, so I don’t have real warm fuzzies about the whole thing,” said Cushing, a stay-at-home mom and Republican. “I don’t think there’s going to be anything he will touch on that will be important.”

The uproar followed Obama to Wakefield High School in Arlington, Va., where he delivered the speech. A small band of protesters greeted his motorcade when it arrived at the school outside the nation’s capital. One carried a sign reading: “Mr. President, stay away from our kids.”

Karen Miller, a former PTA official and a longtime education activist in the Houston area, said she initially had concerns about the speech and accompanying lesson plans. “Whenever a political figure goes to a public school, one has to be very cautious,” she said.

After hearing the speech, however, Miller said she found it inspiring.

“The message he gave to children was so appropriate, that you shape your destiny no matter the hand you’re dealt,” she said. “The message was absolutely on target. I had chills.”

All schools in the 163,000-student Philadelphia district were encouraged to show the speech, which coincided with the first day of school.

Missouri Lt. Governor Peter Kinder, a Republican, had originally criticized the speech and its suggested lesson plans as “steps never before seen by any presidency in the realm of government intervention.” But he said his concerns eased after some of the lesson plans were changed.

“It was perfectly innocuous and a praiseworthy message,” he said Tuesday.

At Thomas Jefferson High School in Auburn, Wash., a racially and economically diverse district outside Seattle, sophomores listened attentively to the address. Fifteen-year-old Ariana Steele said the message connected with her.

“When you see someone of such power saying what your parents say or your teachers have said, like all your life, it really makes it more powerful to you and it really makes you want to try more,” she said.

And William Geist, a San Francisco fifth-grader who likes to sleep late, listened closely to Obama’s story of studying with his mother at 4:30 a.m.