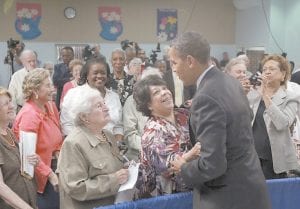 President Barack Obama greeted members of the audience after a town hall meeting on the Affordable Care Act on Tuesday at the Holiday Park Multipurpose Senior Center in Wheaton, Md. (AP Photo)

President Barack Obama on Tuesday sought to sell the health overhaul law to skeptical seniors, launching a defense of his presidency’s biggest accomplishment as the election season gets under way and the Gulf oil spill dominates news.

The questions Obama got from a crowd at a senior center in suburban Maryland, and from others listening on the phone, suggested that plenty of doubts remain even now that the rancorous health care debate has faded from the headlines.

There’s only so much Obama can do to ease concerns. But with crucial midterm elections looming, the administration is determined to put the law’s benefits front and center as they come online, in hopes of winning over public opinion for the new system and generating confidence in leadership by Obama and his Democratic allies controlling Congress.

Tuesday’s event was timed to coincide with the release later this week of the first batch of $250 checks to seniors who fall into Medicare’s prescription drug coverage gap, known as the “doughnut hole.” Some 4 million elderly and disabled people will get checks this year, a down payment on the law’s approach to closing the doughnut hole entirely over the next decade.

The first question came from a woman in the audience: Why can’t he close the doughnut hole faster?

The next question was from a listener in Illinois who wanted to know whether participants in the private insurance plans in Medicare, called Medicare Advantage, would lose benefits.

The answer is yes, according to the Congressional Budget Office. But Obama didn’t come out and say it, explaining instead that Medicare Advantage plans are overpaid and subsidized by the majority of seniors who are on regular Medicare, something that’s also true.

“What you need to know is that the guaranteed Medicare benefits that you’ve earned will not change,” the president said.

Another question was from a laid-off worker in Nevada, too young for Medicare, who asked about losing COBRA subsidies that help him keep insurance.

Obama noted that the health law will help people like that join purchasing pools to gain competitive power to buy insurance. It won’t happen until 2014, so it won’t provide the immediate relief the Nevada worker is seeking.

But, Obama said optimistically, 2014 “is right around the corner.”

The Medicare rebate checks will be the first tangible benefits most recipients will be seeing from the law Obama signed in March, and the first batch of 80,000 is supposed to go out Thursday. The checks are going to reimburse seniors for money spent on prescription drugs. Seniors who fall into the “doughnut hole” gap are responsible for $3,610 in drug costs in 2010 before their Medicare coverage kicks in again.

Obama also announced new measures to combat Medicare fraud, including aiming to halve waste, fraud and abuse in the program by the end of 2012.

Seniors are a key voting bloc for the White House but have demonstrated more skepticism than others about the law. An Associated Press-GfK poll conducted after the law was signed found 49 percent of seniors were strongly opposed, compared to 37 percent of those 64 and younger.