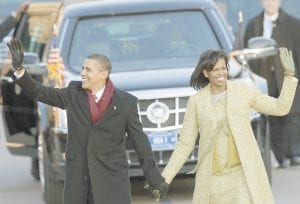 President Barack Obama walked down Pennsylvania Avenue with his wife Michelle Obama on their way to the White House on Tuesday. (AP Photo)

Barack Hussein Obama claimed his place in history as America’s first black president Tuesday, summoning a dispirited and divided nation to unite in hope against the “gathering clouds and raging storms” of unfinished war and grave economic woe.

A jubilant crowd of more than a million waited for hours in frigid temperatures to witness the moment as a young black man with a foreign-sounding name took command of a nation founded by slaveholders. It was a scene watched in fascination by many millions — perhaps billions — around the world.

“We gather because we have chosen hope over fear, unity of purpose over conflict and discord,” the nation’s 44th president said.

The presidency passed to Democrat Obama from Republican George W. Bush at the stroke of noon, marking one of democracy’s greatest gifts: the peaceful transfer of power.

Buoyant and relaxed through the three days of pre-inaugural festivities, Obama seemed somber as he stood on the Capitol steps, placed his left hand on the Bible used by Abraham Lincoln and repeated the inaugural oath “to preserve, protect and defend” a Constitution that originally defined blacks as three-fifths of a person. A deafening cheer went up.

“What is required of us now is a new era of responsibility — a recognition, on the part of every American, that we have duties to ourselves, our nation, and the world, duties that we do not grudgingly accept but rather seize gladly,” Obama said. “This is the price and the promise of citizenship.”

It was a day of high spirits — jarred by sudden concern about the health of Sen. Edward M. Kennedy, a legendary Democrat who is suffering from brain cancer and was rushed to a hospital from a Senate luncheon after the swearing in. “My prayers are with him and his family and (Kennedy’s wife) Vicki,” Obama said. Later, fellow Sen. John Kerry of Massachusetts said Kennedy was laughing and joking at the hospital and itching to get back to work.

On the inaugural parade route, Obama and his wife, Michelle, climbed out of the heavily armored presidential limousine and walked a few blocks along famed Pennsylvania Avenue, waving to adoring crowds under the watchful eyes of security agents.

Obama wove a thread of personal responsibility and accountability through his inaugural address, an 18-minute sermon on civic duty. A liberal Democrat proposing billions of dollars in new spending, Obama nonetheless spoke of the limits of government.

“It is the kindness to take in a stranger when the levees break, the selflessness of workers who would rather cut their hours than see a friend lose their job which sees us through our darkest hours,” he said. “It is the firefighter’s courage to storm a stairway filled with smoke, but also a parent’s willingness to nurture a child, that finally decides our fate.”

Obama’s 10-year-old daughter, Malia, aimed a camera at her father as he spoke. Michelle leaned onto the edge of her seat, body tensed and brow knitted.

“Starting today, we must pick ourselves up, dust ourselves off and begin again the work of remaking America,” Obama said.

He alluded to the inability — or unwillingness — of Americans to adjust to the passing of an industrial based economy. “Our economy is badly weakened, a consequence of greed and irresponsibility on the part of some, but also our collective failure to make hard choices and prepare the nation for a new age,” he said. With that, the 47-year-old former Illinois senator transformed himself — from a candidate claiming his campaign is about the voters to a president promising to put the nation in the people’s hands.

Unlike most predecessors, Obama takes office with his agenda in many ways set for him.

An economy that seems more foreboding than at any inauguration since Franklin D. Roosevelt took office in 1933, with some 11 million people now out of work, and trillions of dollars of stock market investments lost. Two wars, one in Iraq that most of the country has long wanted over and another in Afghanistan that is spiraling downward and needs an overhaul. The continuing fear that another calamitous terrorist attack is not out of the question.

More inspirational than prescriptive, Obama’s inaugural address only glancingly mentioned a series of promises from his campaign: to get the U.S. out of Iraq, stabilize Afghanistan, create jobs, “restore science to its rightful place,” boost the use of alternative energy, address climate change, transform schools, manage government spending wisely and oversee a more bipartisan, lessdivisive approach to policy-making.

To a world eager for his leadership to replace Bush’s, Obama had welcome words: “We are ready to lead once more.”

The day began well before dawn as people made their way downtown to secure spots from which to witness history, and it was to extend well past midnight through a swirl of 10 official inaugural balls and many more unofficial galas.

The drama exceeded even the breathless buildup of recent days’ nearly nonstop discussion on TV, blogs, podcasts and text messages. Not only heavily policed and barricaded Washington but much of the country virtually halted in its tracks — even, albeit briefly, inside the casinos of Las Vegas.

The nation has celebrated 55 inaugurations, but none like the one that made a president out of the son of Kenya and Kansas, a man who rose to America’s highest office largely untested at executive leadership, his political experience encompassing only four years in the U.S. Senate and eight in the state legislature of his home state of Illinois.

Blacks especially powered the jubilation that was thick in the chilly air. Even though Obama didn’t give the topic of race, his or others, much treatment in either his campaign nor his inaugural, blacks poured into Washington from all over to watch firsthand as one of their own at last shattered a painful racial barrier.

“It almost leaves me speechless,” said 69-year-old Tony Avelino, who traveled from Brea, Calif. “This situation is so emotional it’s basically an unreal experience,” added 56-year-old Cleveland Wesley, on the Mall from Houston with his wife as the sun rose. Many others also see in Obama fresh reason for optimism at a time of great national insecurity. Or a chance for rest from the eight acrimonious years of the Bush presidency. Or even a turn toward modernity, as a country hurtling into new ways of communicating, connecting and conducting business chose a man more comfortable in that world than any leader before him.

Excitement over Obama’s young, camera-ready family and the thought of Malia Obama and her sister, 7-year-old Sasha, turning the stately White House into a children’s playroom also figured prominently in the day.

Among the feverishly discussed questions: What would fashion-forward Michelle Obama be wearing when the first couple arrived at their first evening ball to dance to pop singer Beyonce crooning the old blues classic “At Last”? The shimmering gold brocade sheath dress and matching coat that she chose for the daytime sparked immediate watercooler discussion, especially when she paired the outfit with green gloves against the cold.

In a country nearly evenly divided between Democrats and Republicans, it was notable that protests were nearly unseen, a remarkable shift from the two Bush inaugurations that were marked by boisterous demonstrations. One group of about 20 people from a Baptist church in Kansas demonstrated with anti-gay slogans.

With his White House campaign and landslide November victory built in part on his rhetorical gifts, Obama sought to provide reassurance for the future while compelling listeners to sacrifice.

He articulated eloquently the deeper effect on the American psyche of the problems of war and recession: “a nagging fear that America’s decline is inevitable, and that the next generation must lower its sights.”

Not so, said Obama. But he cautioned that the effort will require all citizens, no matter party, age, skin color, or status, to get to work.

“The time has come to set aside childish things,” he said, invoking the Bible. “Greatness is never a given. It must be earned.”

Bush, the man who has led the nation the past eight years, hosted the Obamas for coffee in the morning, accompanied them to the Capitol and sat tightlipped in the front row for Obama’s swearing in and speech.

Obama thanked Bush for his service as president and never directly criticized him. But he also repeatedly talked of the need to abandon current practices, whether “the petty grievances and false promises, the recriminations and worn out dogmas, that for far too long have strangled our politics,” the lack of a watchful enough eye on financial markets, or what he called a false choice between safety and ideals — a reference to brutal interrogation practices and other actions taken by the Bush administration in the wake of the Sept. 11, 2001, terrorist attacks.

“With hope and virtue, let us brave once more the icy currents, and endure what storms may come,” Obama said.

Afterward, he escorted his predecessor to a helicopter and Bush flew first to Andrews Air Force Base for a private departure ceremony, then on to a welcome rally in Midland, Texas and finally, by nightfall, his ranch near Crawford, Texas. As the architect of two unfinished wars and the man in charge at a time of economic calamity, the now ex-president left Washington under the cloud of approval ratings hovering at historic lows. People in the crowd booed when Bush’s image was flashed on jumbotrons and one contingent near the Capitol sang “Na-na-na-na, hey, hey, goodbye” in a jeering farewell.

For all the new president’s call to joint effort, it is political reality that it will largely be up to Obama himself to meet soaring expectations — both those he has created for himself and those others have placed on him unbidden.

In the Oval Office awaits the workaday, hard-nosed business of the daily governance of a nation of 304 million. And while Washington celebrated, events kept moving: Wall Street slid, news surfaced that U.S. carmaker Chrysler could be purchased in part by Italian auto giant Fiat, and prosecutors at the U.S. detention center at Guantanamo Bay, Cuba, sought to suspend all war-crimes trials pending Obama’s guidance.

As one of his first official acts, Obama signed a presidential proclamation declaring Tuesday a “National Day of Renewal and Reconciliation.” He also officially nominated his Cabinet, except for Commerce and Defense secretaries. Defense Secretary Robert Gates, a holdover from the Bush administration, does not need to be renominated.

The Senate convened to quickly confirm six members of the Cabinet but put off for a day the approval on his choice to be secretary of state, Hillary Rodham Clinton, because Republican Sen. John Cornyn of Texas objected to the unanimous vote.

Congress already has given Obama $350 billion in new financial industry bailout money and is fast-tracking a massive economic stimulus bill to be worth $825 billion or more. And Bush has ordered 30,000 more U.S. troops to go to Afghanistan this year, adding to 32,000 already there. But these moves are hardly the last word on the big issues of the day.

And some of Obama’s attention to those things will undoubtedly be deferred to crises — a natural disaster, an overseas conflagration — that can pop onto the scene unexpectedly and consume enormous amounts of White House energy.

His transition also produced some missteps that raised questions about whether Obama’s highly disciplined, perfectionist organization that proved brilliant at winning an election will be equally brilliant at governing.

Obama’s team overlooked known problems in the backgrounds of two Cabinet nominees — Bill Richardson for Commerce and Timothy Geithner for Treasury. They also flubbed the introduction to Congress of Leon Panetta as CIA director. Obama also was tripped up by controversy surrounding the appointment of his successor in the Senate.