Obama thanks No. 1 Wildcats for Haitian relief 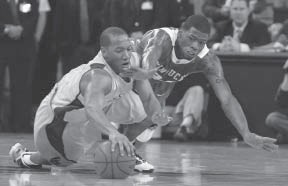 Kentucky’s Deandre Liggins, right, battled for the loose ball with South Carolina’s Devan Downey during the first half of Tuesday’s game. (AP photo)

The country’s No. 1 college basketball fan thanked Calipari and his players Tuesday for helping to raise more than $1 million as part of the “Hoops for Haiti” telethon. Then Obama counseled them to keep their focus and not let their new position atop the polls go to their heads.

“There is that tendency once you get to number one to let down a little bit,” Obama said.

Maybe the Wildcats should pay attention. Obama, who regularly played pickup games during his run for president, last year picked champion North Carolina to win it all in his NCAA bracket.

Kentucky freshman DeMarcus Cousins told Obama the team looked forward to meeting the president at the White House after the season — a rite of passage for NCAA champions.

“The way you guys are going, that may happen,” Obama answered.

Obama enjoyed talking basketball with the undefeated Wildcats (19-0), who were to play at South Carolina on Tuesday night. But the president was just as complimentary about the team’s efforts to help those devastated in Haiti by the catastrophic earthquake earlier this month.

Calipari, past and current players and others answered phones from donors while people bid on items ranging from autographed pictures to dinner at the coach’s home with actress — and Wildcat megafan — Ashley Judd. The university says that meal went for $98,100.

With matching funds, the school said the money raised by the Wildcats surpassed $1 million.

“I just want to let you guys know that I am very, very proud of what you guys did,” Obama told the team, wearing blue “Hoops for Haiti” T-shirts and crowded around a white phone at the Colonial Life Arena.

“It shows a lot of character and I hope that carries over,” the president continued. “Some of you will be going to the NBA. Some of you are going to be doing other things with your lives, but I hope that spirit of doing for others continues.”

Other programs have also taken up the call to help Haiti.

Calipari credited his players and Kentucky fans for the successful fundraiser.

“I don’t know what to say. It’s emotional,” he said. “We just spent a day and all you people did it. I just want to thank you. Thank you, Kentucky.”

Calipari, who met President Bill Clinton while coaching Massachusetts, and the Wildcats had to compose themselves after the White House operator said she’d put the president on the line.

“Wow, this is something,” Calipari said.

“Your leadership has inspired us all,” Patterson said.

“What’s going on all-star?” the president said. “I’ve been watching you.”

Wall invited Obama to watch Kentucky play in person and suggested a game of “HORSE.”

“I’m not going to play horse with you,” Obama replied, “because I don’t want to lose.”

The president suggested a friendly pickup game. “I’m going to make sure I have you on my team,” Obama told Wall.

Wall said he and his teammates were floored the president took time to call.

“I’m still nervous and shocked about knowing the president is one of your fans,” the freshman said.