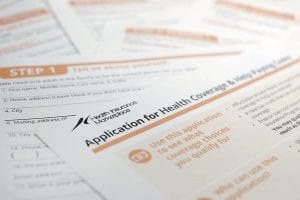 This photo shows the federal government form for applying for health coverage. Getting covered through President Barack Obama’s health care law might feel like a combination of doing your taxes and making a big purchase that requires research. (AP Photo)

Contentious from its conception, President Barack Obama’s health care law has survived the Supreme Court, a battle for the White House and rounds of budget brinkmanship. Now comes the ultimate test: the verdict of the American people.

The main components of “Obamacare” went live as scheduled Tuesday, glitches and all. The biggest expansion of society’s safety net since Medicare in now in the hands of consumers, and most of their concerns don’t revolve around ideology and policy details.

People want to know if they can afford the premiums, if the coverage will be solid, where the bureaucratic pitfalls are and if new federal and state websites will really demystify shopping for health insurance. Full answers may take months.

Expect the rollout to get off to a slow start, with some bumps.

People who don’t have access to job-based health insurance can start shopping right away for subsidized private policies. Or they can wait to sign up as late as Dec. 15 and still get coverage by Jan. 1. Many will probably want to see how it goes for the first wave of applicants before they jump in.

Glitches are likely to pop up in the new online insurance markets. Several states were still struggling to get plan information to display accurately on their websites. Earlier, the federal government announced delays for small business and Spanishlanguage signups.

Consumers also could run into problems getting their right subsidy amounts. People with complicated tax returns and extended families living under the same roof could find they need personal assistance to work out the issues. Referrals to state Medicaid programs might go smoothly in some states, not so well in others.

“As this unveils, it is going to be very clear that everything can’t be done on a computer,” Christine Ferguson, director of Rhode Island’s marketplace, said in an interview prior to the launch. “But by Day 60 to 120, and the year after that, it’s going to get a lot more user-friendly and effective.”

Eventually, at least half the nation’s nearly 50 million uninsured people are expected to get coverage through the Affordable Care Act, either through subsidized private plans sold in the new markets or an expanded version of Medicaid in states accepting it for lowincome adults. Immigrants in the country illegally will be the largest group remaining uninsured.

People who do have access to employer-based plans will also see changes. Starting Jan. 1, virtually all Americans will have a legal obligation to carry health insurance or face fines. Passing up the company medical plan in exchange for a bigger paycheck may no longer be an option. But employees who lose their jobs, entrepreneurs starting their own businesses and people in between school and work could have an easier time getting coverage.

Also as of Jan. 1, a preexisting medical condition will no longer be a barrier to getting health insurance.

Federally operated markets in 36 states opened at 8 a.m. Eastern time on Tuesday. The remaining states are running their own markets.

Polls show the country remains divided over the law, with opponents outnumbering supporters. Nonetheless, a Kaiser Family Foundation survey released over the weekend found 56 percent of Americans disapprove of cutting off funding to expand coverage for the uninsured, as congressional Republicans have been pressing to do.

Nearly three-fourths of the uninsured were unaware of the new insurance markets opening to serve them.