Officer describes events that led to arrest of five suspects 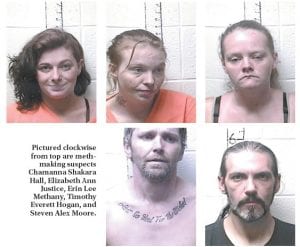 After a computer check of the license plate showed there was no insurance policy covering the car, Damron was able to see through open car windows that none of the five occupants of the Taurus were wearing seat belts. She then activated the cruiser’s lights and siren in an attempt to pull the car over as it headed away from Whitesburg.

Moore, the driver of the car, pulled the Taurus off the roadway and into a driveway on 931 South near Big Cowan, Damron said. As Damron pulled her cruiser off the road to conduct the traffic stop, Moore drove back onto 931 South, turned onto Highway 588 toward Ice and lost control of the car while attempting to flee. After the Taurus wrecked in a yard, the five occupants got out of the car and began running toward the back of a nearby house, Damron said.

After Damron identified herself and told the five suspects to stop and get on the ground, Hogan and Methany obeyed her commands, but Hall, Justice and Moore kept running.

After Letcher County Deputy Sheriff Sidney Fields arrived on the scene a short time later, Hall, Justice and Moore were wading across the North Fork of the Kentucky River. A witness on an all-terrain vehicle told police the three were headed toward George B. Branch, after which a second witness reported seeing them headed toward a wooded area off George B. Branch.

After returning to the Taurus and finding that its four doors were left open, Damron saw what was determined to be an active “one-step meth lab” located in the floorboard behind the driver’s seat. Bubbles were foaming from the container, she said, adding that two beer cans and two syringes were also in plain sight. Damron said a generator tube and a sandwich bag containing rock salt, all used in the meth-making process, were found on the ground outside the car.

While Damron and Fields waited on a Kentucky State Police meth clean-up team to arrive at the scene, Hogan and Methany were arrested.

At 8:30 the next morning (June 25), police received a call from a George B. Branch resident who reported seeing Hall, Justice and Moore walking in the area. The three were apprehended and arrested Saturday morning.

In addition to the methrelated counts, Justice is charged with first-degree fleeing or evading police (on foot).

A deputy jailer later found what appeared to be meth located inside a small piece of folded aluminum foil that was carrying in a wallet taken from the back pocket of her shorts.

Hall, Hogan, Justice, Methany and Moore were still being held in the Letcher County Jail Tuesday night pending the outcome of a preliminary hearing. Bond for each was set at $10,000 cash plus the requirement they be placed on home incarceration if released.