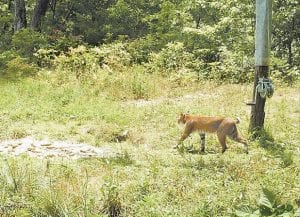 This large cat photographed in July 2010 with a trail camera near Bottom Fork, between Jenkins and Mayking, could possibly be mistaken for a cougar if not for the presence of a short tail common to bobcats. (Photo by Lige Johnson)

Despite eyewitness accounts, it is unlikely that a cougar would be hunting in the mountains of Letcher County — or anywhere else in Kentucky for that matter, said a spokesman with the Kentucky Department of Fish and Wildlife in Frankfort.

“There’s nothing documented that there is one in the state,” said Mark Marraccini. “We haven’t had any confirmed sightings at all. While they are native to the state, they have been absent for over a century.”

According to Marraccini, one or two people call Fish and Wildlife each year to report having seen a cougar, also known as a mountain lion or puma.

“Nobody has good evidence,” Marraccini said, adding that scat, hair or tracks haven’t been collected for officials to examine.

Marraccini said if cougars have made their way to eastern Kentucky, their image would be captured on trail cameras posted on trees throughout the area.

“I would expect to see pretty good pictures of them on trail cameras,” said Marraccini. “We haven’t seen one that we can positively identify.”

Cougars are officially classified as extinct in Kentucky, and wildlife officials believe that people who think they saw a cougar must have actually seen a large bobcat. Bobcats do roam eastern Kentucky, where they hunt small prey such as rabbits, squirrels and rodents. Bobcats have short tails and can grow to about 20 to 45 pounds. Cougars have much longer tails than bobcats and can weigh anywhere between 80 and 200 pounds.

Mitch Whitaker, who oversees the 4-H raptor rehabilitation program for the Letcher County Extension Service, is among those who believe cougars do pass through Letcher County. Whitaker said people who say they have seen a cougar in the woods here nearly always remark on the animal’s long brown tail.

Letcher County Surveyor Richard Hall knows the difference between a bobcat and a cougar and is certain he saw one of the big cats with long tail on Pine Mountain about eight years ago.

Mountain Eagle editor Ben Gish is also confident the large cat he saw near his home at Thornton around 8 p.m. last Thursday was not a bobcat. Gish said the animal was much larger than either of two Labrador retriever dogs he was walking with at the time (one of which weighs 90 pounds), and that the first thing he noticed about the cat was its very long brown tail. Gish said the animal surprised him and the two dogs when it suddenly appeared from behind a clump of bushes, turned and quickly raced down a narrow hollow before long-jumping a creek and running into the woods.

Marraccini said the only way a cougar would be in eastern Kentucky is if someone obtained a cougar cub and then released it.

“We don’t have any that are occurring naturally,” said Marraccini.

Marraccini said mountain lions are expanding eastward, but are still thousands of miles away.

According to National Geographic, cougars once inhabited nearly all of the United States but eventually became nearly extinct in the Midwest and Eastern U.S. The magazine says cougars seldom attack humans and require a territory of about 30 square miles. Cougars like to prey on elk, deer and smaller animals such as coyotes and raccoons.

The volunteer organization Cougar Rewilding Foundation says that while white-tailed deer and other food sources that attract cougar populations are again prevalent in Kentucky and many other Eastern states, studies it sanctioned in the 1990s failed to find any evidence of cougars in Kentucky, Virginia and West Virginia.

In September 2010, a Mason County, Ky., woman saw a mountain lion stalking prey in a field near their home in the community of Rectorville. The woman told the The Ledger Independent newspaper of Maysville the cougar had a body “about as long as a pair of love seat cushions,” was thin, and had a long tail.

State Department of Fish and Wildlife officers said that cougar was probably an invasive species not native to Kentucky.