Official: No Cup race in Kentucky in ’09 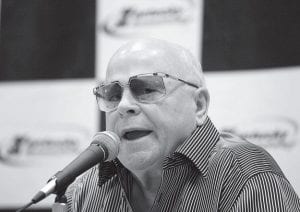 Despite the pleas of Kentucky Speedway’s prospective new owner, a NASCAR official says there will be no Sprint Cup race at the track next year.

NASCAR spokesman Ramsey Poston said Saturday that the 2009 Sprint Cup series schedule won’t include a stop at the 1.5-mile tri-oval located about halfway between Louisville and Cincinnati.

“There will not be a NASCAR Sprint Cup series race at Kentucky on the 2009 schedule,” Poston said at the Nationwide Series Meijer 300.

Speedway Motorsports Inc. is in the process of purchasing the northern Kentucky track from the current ownership group led by businessman Jerry Carrol.

SMI chairman Bruton Smith toured the track with Carrol over the weekend and told reporters he remained optimistic about landing a coveted Cup date next year if the current ownership group drops an antitrust lawsuit against NASCAR and International Speedway.

The speedway filed the lawsuit in 2005, alleging they worked together to create an unfair monopoly and prevent Kentucky from securing a Cup race. The lawsuit was dismissed in January, but the speedway has appealed.

“If the lawsuit, if the present owners see fit to change that, the chance of getting the event next year would go up greatly and I think we could get that done,” Smith said.

Carrol, however, said his group has no plans to drop the lawsuit.

“That’s his problem,” Carroll said. “We’re not going to not have the lawsuit. It’s the only opportunity that we have and we said why we went out to get the lawsuit (was) to create an even playing field.”

The track regularly hosts NASCAR’s second-tier Nationwide Series, Indy Racing League and ARCA events, but has lobbied unsuccessfully since it opened in 2000 to bring a Cup event to the 1.5-mile oval.

With crowds of more than 70,000, the track is currently the largest venue that hosts a Nationwide event but doesn’t have a Cup race. Smith has said he immediately plans to add 50,000 more seats to make it more suitable for a Cup race.

“I can’t lie to you, but we’ll make so many you’re going to like some of them,” Smith said. “There’s nothing off the table.”

The overhaul has already begun. The SMI logo was strategically placed throughout the track before the Meijer 300, and Smith is eager to get to work on turning the facility into one of auto racing’s finest.

“I’m convinced that this is a fabulous market and we’re going to do some big things here,” Smith said.

The estimated economic impact that a Cup event would have on northern Kentucky is expected to approach $200 million.

SMI could choose to move a Cup date from one of its seven NASCAR-sanctioned tracks to the speedway, an option Smith did not rule out.