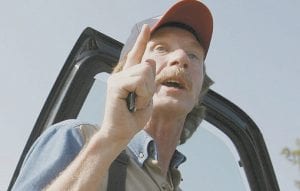 Steve Allred, brother of trapped miner Kerry Allred is seen after an interview Monday in Huntington, Utah. A coal mine in which six men have been missing for two weeks is so unstable that rescuers will only be sent inside if there is an indication someone is alive. (AP Photo/ The Salt Lake Tribune, Leah Hogsten)

Cody Allred closes his eyes and pictures his father and five other miners sitting in the impenetrable darkness of a collapsed mine waiting for a sign, any sign of rescue.

“I picture my dad wondering ‘Where the hell are they? Any time now,'” he said.

Federal and mine officials are less hopeful. Knowing there has been no sign of life since the men went missing more than two weeks ago, they say the miners may be forever entombed in the mountain.

“I don’t know whether the miners will be found, but I’m not optimistic they will be found alive,” Bob Murray, chief executive of Murray Energy Corp., coowner of the mine, said at a news conference Monday night.

Even as the community prepared yesterday (Tuesday) to say goodbye to Dale Black, a rescuer killed while trying to find the men in central Utah’s Crandall Canyon mine, the families and officials were at odds over whether enough had been done.

Richard Stickler, head of the federal Mine Safety and Health Administration, said safety consultants brought in over the weekend have determined the shaking and shifting of the mountain is too risky to let rescuers resume tunneling to try to reach the men, who have been trapped since the Aug. 6 cave-in.

The tunneling stopped after three rescue workers were killed and six were injured when the shaft they were working in collapsed last Thursday night (Aug. 16).

Murray, who disappeared from public view after that collapse, met Monday with miners’ relatives who have accused him of abandoning them and their loved ones.

He said he told the families their relatives would likely remain buried in the mine. “Their reception to me was probably not good. But at some time, the reality must sink in, and I did it as compassionately as I possibly could,” he said.

Family members say they have been frustrated by the pace of the rescue effort and by mine and federal safety officials who have backtracked from early information about the missing miners’ location.

“We were asking them questions and not getting straight answers,” said Cesar Sanchez, whose brother Manuel Sanchez is among the missing.

Families have pleaded for the use of a rescue capsule that could be lowered through a 30-inch hole that could take weeks to drill.

“We need to get that big hole punched to get them big men out,” Cesar Sanchez said.

The capsule had been considered a last, best option since the rescue tunnel collapsed. Such capsules have been used to save miners in other disasters, but the men in the Crandall Canyon mine were thought to be more than 1,000 feet deeper than in previous rescues.

Bob Ferriter, a former MSHA engineer who teaches safety at the Colorado School of Mines, said it wouldn’t make sense to spend weeks drilling a large hole for a rescue capsule unless searchers knew where the men were located.

Ferriter said it would be foolish to send a man down a capsule to recover the miners’ bodies, given the instability of the mountain and the depth of the hole. There’s a chance the capsule could get stuck or that a mountain “bump” could bury the capsule. The air might be inadequate as well, Ferriter said.

“I don’t see the advantage of putting a live person down there,” Ferriter said. “You could have a bump that closes the hole above him, and then you’ve lost another guy.”

But Steve Allred, the brother of trapped miner Kerry Allred, believes his brother is alive and said the men need to be recovered.

“My brother is trapped underground and I’m hearing that they’re basically giving up, and that’s unacceptable,” he said. “One way or the other we’ve got to have closure.”

For nearly two weeks, mine owners and federal officials had insisted the men might be alive. But repeated efforts to signal the miners have been met with silence, and air readings from a fourth narrow hole drilled more than 1,500 feet into the mountainside showed insufficient oxygen to support life in that part of the mine.

On Monday night, Murray defended MSHA and himself from criticism that they botched the rescue effort and needlessly put rescue workers at risk.

“There was absolutely nothing more that MSHA or Murray Energy or (mine co-owner) Utah American could have done to rescue these trapped miners,” he said. “And based on what we knew at the time, we did everything correctly. There were no mistakes.”

The missing miners’ families called the dead and injured who worked to find their loved ones their “heroes.”