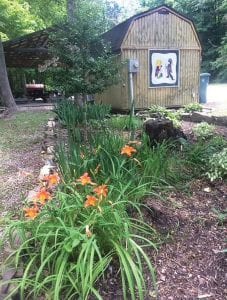 FLOWERS FOR FREEDOM — Letcher County Jail inmates on work release fixed the flowerbeds at the Little Shepherd Amphitheater in Jenkins last month. The amphitheater honored the inmates and Deputy Jailer Lena Hensley at a performance of the outdoor drama. See related information on Page 16 of this issue. (Photo submitted)

Chuck Sexton, President and CEO of One East Kentucky, told the Letcher County Fiscal Court Monday that because of the competitive nature of economic recruiting, most economic development work is highly confidential. Sexton said that although One East Kentucky works every day to develop jobs in the nine-county district it represents in far eastern Kentucky, the recruitment activity, as well as the interest of potential investors in the region, is usually quiet.

He said the competition for development is so intense it pays to keep developments secret until they are finalized. He added that sometimes, a corporation with an interest in an area will do all the regular economic research on a potential site, and then send undercover investigators in to look at quality of life issues, schools, resident attitudes toward the community, and other things that reveal the level of cultural spirit of an area. Sexton added that a single person with a grudge against the school system, city government, or any other institution may ruin a deal, so it’s a good idea to keep criticism in-house, or at least not share it with strangers.

Sexton referenced the recent announcement that Canadian manufacturer Dajcors Aluminum will invest nearly $20 million to create a facility in Hazard to make aluminum products that will bring nearly 265 jobs to the area. Judge/ Executive Terry Adams told Sexton he sees the Dajcors Aluminum announcement as an opportunity for Letcher County workers to find a good well-paying job close to home, and that he sees economic development as a regional effort rather than a single county issue.

Sexton and Trish Adams, Industry Liaison with the Eastern Kentucky Concentrated Employment Program (EKCEP), both said that the regional approach Judge Adams has adopted is the best way to accomplish things in rural economic development. EKCEP serves 23 eastern Kentucky counties in workforce creation and placement with offices throughout the region. In almost 50 years of service, EKCEP has used a flexible approach to meet changing needs for employment within the region.

Trish Adams told the court that when One East Kentucky was conceived nearly five years ago, EKCEP conducted a workforce study, and it has worked since then to develop a suitable workforce for economic development. She echoed Sexton’s statement about the competitive nature of recruiting industry, and said eastern Kentucky has a trainable workforce that is ready to go to work, but eastern Kentucky is in competition with the world.

Sexton also named several issues that are important for attracting industry, including some that are absent in Letcher County. He said the current lack of a spec building at the Gateway Industrial Park in Jenkins does not help recruitment efforts there. Sexton said he has begged FERUS Industries of Canada, a gas well service company that abandoned its site at the industrial park, to give the building to Letcher County, but has had little success. A spec building is a building with no specific use to attract a business to adapt it to its needs.

Sexton added that the absence of a through rail line to haul large items keeps some industries that use bulk products out, and said that other infrastructure such as water and sewer are critical. Large scale food processing uses large amounts of water and a significant sewer capacity that sometimes requires special accommodations for sewage treatment. He added that problems with providing matching funds for federal grants usually plagues the region and that a chicken/egg approach to increasing capital requires jobs to provide a tax base, so matching funds are often difficult to come by.

Sexton told the court that good partnerships with local governments are vital for rural economic development, and rural areas need a better funding strategy for their approach to federal funding. In response to a question from Judge Adams, Sexton said fiscal responsibility is extremely important in attracting development and most rural counties have the same issues. He finished by saying that even though a lot of the work is done in confidence, “We work for you every day.”

In other business, the court voted unanimously to reject the single bid for removing the con veyor belt structure from the Swanee Tipple at Isom, which is owned by the county. At a called meeting in June that was held to declare some county property surplus, Judge Adams said he hopes that the old tipple can be leased for an industrial site, but the infrastructure will have to be removed. The bid from Greg Hale LLC, a Letcher County construction company, came in for $62,500. Adams said the request for bids gives the infrastructure to the winning bidder, and he had hoped the receipt of the material would be enough to pay for the work, or at least bring a lower price for the work.

County Attorney Jamie Hatton told the court it is not required to accept any bid, and if the bid is refused, the county can move forward with negotiations with Greg Hale LLC or others that meet requirements. Third District Magistrate Maverick Cook moved not to accept the bid and seek other alternatives to have the structure removed. The court unanimously approved the motion.

Letcher County Jailer Bert Slone explained to the court how the jail’s commissary works. Slone said the commissary serves as a store to supply extras for inmates, including snacks, cigarettes, sundries, and other items that are not provided. He said the commissary fund pays for some jail equipment such as the video cameras that give the jailers 100 percent coverage of the prisoners’ area, however Slone said the most important use for the commissary is to pay all the expenses of the work release program.

Slone said that county prisoners with good behavior are eligible to go out on work release and are often seen around the county cutting weeds, picking up roadside trash, working on county parks and cemeteries, and doing a variety of other jobs to help the county.