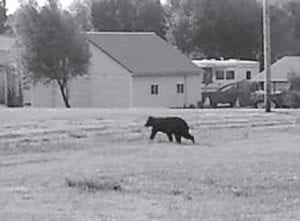 Kristie McKinnis and her family were getting ready for church when her son went out on the front porch and saw a black bear in the front yard. They live on the Logan/ Simpson County line, three miles outside Auburn.

A black bear seen roaming fields and yards in one western Kentucky county is looking for a lady friend.

Several people in Logan County have reported seeing the large wild animal. Scott Harp, regional coordinator/ wildlife biologist with the Kentucky Department of Fish and Wildlife Resources, said the bear is likely the same one that people spotted last year.

“Last summer we had a bear come up through Glasgow,” Harp said. “ It went to Rough River Lake, hit the parkway, turned left and went to Ohio County. We had reports of this bear all along this route. This bear spent the winter in western Ohio County. We were watching for him in Ohio County pretty readily. He went south, down to Butler County, and from there, went to Logan County.

“This spring he is looking for a lady, and if he doesn’t find one, he will continue to search for a mate,” Harp said.

Last week, Kristie McKinnis and her family were getting ready for church when her son went out on the front porch and saw a black bear in the front yard. They live on the Logan/ Simpson County line, three miles outside Auburn.

“ He was just rolling around out there on his back,” McKinnis said. “At first we were shocked.

“We had trash and everything … and he never bothered it. He looks pretty healthy,” McKinnis said. “It was just kind of shocking to see a bear. I’ve lived in Alaska. I never saw a bear in Alaska. It was really pretty exciting.”

As soon as the bear caught a glimpse of people watching him, he took off.

That’s typical behavior for a bear, Harp said. They are generally frightened by people.

“Typically, a back bear, if you leave it alone, it will leave you alone,” Harp said.

It is the first black bear sighting in Logan County in several years.

“It’s a rare occurrence to have a bear here,” he said.

“Don’t leave out food for your pets that might attract them up to your house. You want to make your area less attractive to them. Leave out just enough food for your dog to eat at that time. The last thing a bear wants to do is get up around humans. They don’t want to mess around with humans. Pets are not something that’s an issue. They don’t come actively looking for a cat on your porch,” Heady said.

“Once he associates that there is an easy meal, they will come back for an easy meal,” Heady said. “ You don’t want them to associate humans with a free handout.

“Just leave him alone, and he will go about his business.

“Eastern Kentucky has bears. Tennessee has bears. It wouldn’t be out of the ordinary for one to venture up this way. It’s Mother Nature’s way of ensuring that there is not a stagnant gene pool. There might be some that venture up through here,” Heady said.

It is illegal in this area to shoot or trap bears.

“They are a protected species,” Heady said.

Don Rogers, who has a farm near South Union, also saw the bear recently.

Rogers was on his way to Bowling Green with his wife when the bear came out of the woods and onto a public highway. He meandered there for a while before heading back into the woods.

Rogers makes sure to create noise when he goes back on his property to check his beehives or other areas so the bear will hear him.

Ray Hughes, who farms just outside of Auburn, saw the bear in one of his fields near a grain bin recently.

“We were working on a piece of equipment, and we spotted it coming across the woods across our cornfield. We tried to get a picture of it. I guess it got spooked and ran back into the woods.

“It just leisurely walked across the field,” Hughes said. “When we started the pickup truck, it spooked it, and the bear ran back into the woods again.”