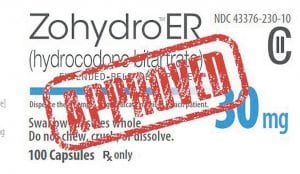 The sale of the powerful narcotic ZohydroER began this week.

A new narcotic pain pill is being released to the market this month, and critics are begging the Food and Drug Administration to reverse its decision, fearing its addictive qualities and overdose potential.

Zohydro ER is an extended release hydrocodone medication made by Zogenix. It is a highly addictive drug only meant for patients with pain severe enough to require daily, round-theclock, long-term treatment, for whom other treatments are inadequate.

“It’s a capsule of pure hydrocodone so powerful that one accidental dose can kill,” Laura Ungar reports for The Courier-Journal of Louisville. Doctors, lawmakers, drug-control officials and others are voicing their concerns that Zohydro ER will bring a new wave of prescription drug abuse to Kentucky just as Kentucky has been making “great strides” against this already existing problem.

Zohydro ER, unlike recent formulations of the popular painkillers Oxy- Contin and Opana, is not crush-resistant, making it easier for abuse by crushing and then snorting or injecting it, Ungar reports.

Kentucky ranks third in the nation for overdose deaths, with more than 1,000 Kentuckians dying each year from prescription drug overdoses. The number has leveled off following passage of laws that target pill-pushing clinics and doctors, and put stricter regulations on painkillers.

“We could see the Oxy- Contin days come back, just in a new form,” Dan Smoot, president and chief executive officer of the eastern Kentucky anti-drug organization Operation UNITE, told Ungar. Smoot was referring to the drug that first sparked Appalachia’s prescription abuse problem in the late 1990s.

The FDA approved Zohydro ER last fall, even though its own scientific advisory panel cited concerns about misuse and abuse and voted 11-2 against approving it. It’s set to hit the market early this month, Ungar reports. Last week a coalition of more than 40 health, consumer and other organizations urged the FDA to revoke its approval.

Attorney General Jack Conway was among 28 attorneys general who sent the FDA a letter asking it to reconsider, noting that it is reportedly “five to 10 times more potent than traditional hydrocodone products, and has no abuse-deterrent properties.”

“We do not want to see the great strides we have made in Kentucky combating prescription drug abuse reversed,” Conway said in a statement after signing the letter. “For decades, we have fought the disastrous effects of the illegal marketing of the drug OxyContin. Zohydro ER has the potential to exacerbate the prescriptionpill epidemic. … The FDA’s decision to approve the drug doesn’t make sense.”

U.S. Rep. Hal Rogers, R- 5th District, and Senate Republican Leader Mitch Mc- Connell, as well as two other senators, have expressed their disapproval, but the FDA says the drug meets its safety requirements and the benefits outweigh the risks for patients who qualify for the drug, Ungar reports.

Zogenix officials told Ungar they are committed to going “above and beyond FDA requirements” to make sure the drug is used appropriately, will monitor for misuse, and will allow an outside group to monitor and analyze their data. They said they are also working on an abuse-resistant pill.

They also pointed out that Zohydro ER will be regulated as a Schedule II controlled substance, which means it can only be dispensed through a physician’s written prescription, with no refills.

“Opioids are important pain-relieving medications that can provide significant benefits for patients when used properly for their approved indications,” Zogenix wrote Ungar.

Another benefit cited by Zogenix officials is that unlike many other hydrocodone painkillers, Zohydro ER does not contain acetaminophen, which can cause liver failure when used over a long period. They said more than half of liver transplants are caused by acetaminophen overdoses from overusing these sorts of combination drugs.