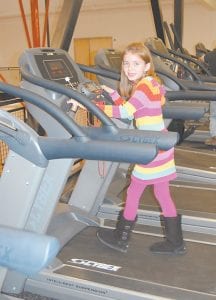 Megan Mc- Cown, of Eolia tried out one of the new treadmills at the Letcher County Recreation Center. She is the daughter of Amanda and Brian McCown.

Letcher County Judge/ Executive Jim Ward held back tears as he welcomed an estimated crowd of about 400 at a ribbon cutting ceremony for the Letcher County Recreation Center on Saturday.

“What a beautiful day. What makes it more beautiful is seeing a dream become reality,” said Ward. “This is something I have dreamed about for a long time.”

Ward said standing in front of the $7 million building and cutting the ribbon was one of the highlights of his life.

State Sen. Johnny Ray Turner said he had attended many ribbon-cutting ceremonies but had never seen a crowd as large at a similar event.

“We’ve been very fortunate to do a lot of things in Letcher County,” said Turner. “It’s a phenomenal looking building.”

The facility includes a 34-foot-tall climbing wall, which features 12 different paths for climbers to attempt. A two-and-a-half story indoor playground containing a triple slide, an obstacle course, a separate area for toddlers and an enclosed spiral slide is located adjacent to four party rooms. 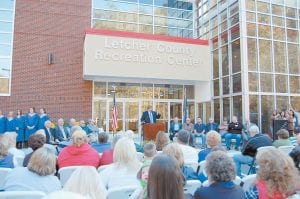 The gymnasium is made up of three 70-foot courts, which can be blocked off with dividers. The gymnasium will serve as the county’s emergency shelter during natural disasters.

The six-lane bowling alley has a large projector screen with a sound system and DVD player. During cosmic bowling the lanes light up with 60 black lights. A concession stand and an arcade are also located downstairs.

Summit Engineering Inc. designed the center built where the old A&P building used to be located beside Dairy Queen in Whitesburg. The Letcher County Rangers police force will be stationed out of the recreation center, which will have a 32-camera security system. 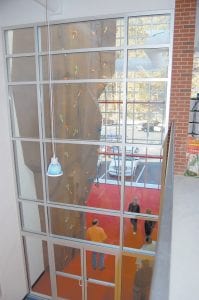 The 34-foot-tall climbing wall can be seen from the second floor of the Letcher County Recreation Center.

Turner said the 43,000-square-foot center will help deter children from drugs and alcohol. State Rep. John Short told crowd members they can see where their coal severance dollars are going.

State Rep. Leslie Combs, who was not able to attend the Oct. 22 ceremony, said the center will quickly become the community’s focus. She described the center as an early Christmas present.

“If all our presents could be this nice,” said Combs.

District Three Magistrate Codell Gibson described the facility as “a great piece of work.” District Four Magistrate Keith Adams “hopes the young generation enjoys this as much as the older generation.” District One Magistrate Bobby Howard said coal miners are the reason the recreation center was built.

“Thank a miner for this,” said Howard. “You all made this possible.”

Former District One Magistrate Bob Lewis said while he was campaigning, people kept telling him some type of recreation center was needed in the county. Whitesburg Mayor James W. Craft said Saturday was a red-letter day for the city.

“It’s one of the most fantastic things I have ever been minimally a part of,” said Craft, who credited Ward for his hard work on the project.

“He wants everyone to take ownership of it,” said Kincer. “The people in Jenkins are excited.”

Letcher County Coroner Marty Baker said the recreation center has been long needed in the county.

“You have made a dream come true to me and a lot of other people,” said Baker. “It’s an impressive building.”

Letcher County Sheriff Danny Webb said he had toured the facility and is impressed.

“I’ve always heard the children say they don’t have anything to do,” said Webb. “Now they can’t say that anymore.”

Jack Waddles, an architect with Summit Engineering Inc., said the recreation center is a necessity for the county.

“This proves that we can have as good a facility as anywhere in the state,” said Waddles. “If we take care of it, it is going to last a long time.”

Ward said the center isn’t complete just yet. The walking track can’t be installed until the concrete passes a humidity test. Bleachers for the gymnasium haven’t arrived.