Ohio gets almost foot of snow 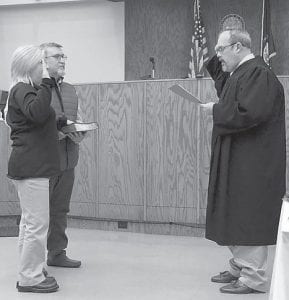 Renee Campbell was sworn in as the Letcher County Cororner on Jan. 6 by Judge James Craft Jr. Also present was her husband, Hagel Campbell.

Hello everyone! Can you believe January is half gone already? I hate to wish time away, however I am ready for spring, or should I say summer, even with the 90-degree temperatures.

Mother Nature gave us a gift of almost a foot of the fluffy white stuff called snow. We still have quite a bit left.

My son Keith Ballard shoveled the snow next to the fence and there are piles that are going to be there for quite some time. I am really grateful that Keith is still with me, as I sure wouldn’t be able to do the things he does for me.

The hot water tank has decided to quit working again but thanks to Keith, he can replace it.

Each time I unlock my doors I thank Keith silently as I have two locks on each door. Keith replaced the locks for me, so one key opens all four locks. It is a lot less aggravating for me.

I never thought I would be satisfied living with someone, but so far it hasn’t been really all that bad. Sunday morning I was tiptoeing around in the house as I thought he was asleep, and here he comes in bringing me a doughnut from the bakery, even though he knows it will hurt me. I didn’t know he had left as he has an entrance to his room.

My sympathy goes to the family of Lawrence Boggs of Cornettsville. Lawrence was a very faithful to attend Campbell’s Branch Community Center’s dancing. I wasn’t very acquainted with Lawrence, however he was so much like me, as he had a passion for dancing. I’ve seen him dance until his shirt was completely wet with sweat.

I have one regret, as Lawrence asked me to dance the last time I saw him at Campbell’s Branch. I refused, as I am not very good at a dance called the two-step. I will hit the floor almost running to dance square dance, or just fast dance, however I admire watching the twostep, but I am not good at it. I freeze when dancing a slow dance. You may as well get a board and dance with it.

Lawrence will be missed by all at Campbell’s Branch Community Center. We never know what goes on in someone’s personal life.

During a short conversation Lawrence told me that he had danced at so many different locations. That really brought a smile to my face, as I revealed to him that my small feet had danced on boards, dirt, and blacktop at bluegrass festivals, in Kentucky, Tennessee, Virginia, and several places in Ohio.

Please keep Bertha Turner and her friend Jerry in your prayers, as they were involved in a serious accident Saturday evening.

Bertha had to be transported from Whitesburg Hospital to Pikeville, then to UK in Lexington. Bertha is in very serious condition.

Her daughter Glenda Tolliver Green and Mikey Tolliver are with Bertha. Glenda had dental surgery and is in a lot of pain. Bertha celebrated her birthday a few days ago.

Well Mother Nature isn’t finished with the Ohio Valley area in giving us snow yet, as Saturday night we ended up with about three inches, and snowdrifts about six inches, with temperatures below zero for a few days.

Two different times in a week Keith has shoveled snow so I don’t have to walk in it. He has cleaned both of my cars off. I wasn’t out anywhere so that was a waste of his time.

Friday night, Tony Hale performed with Evan Lanier & Bluegrass Express at Coon Hunters Club. I had every intention of going, but once again I got very sick so I didn’t make it.

I do have some good news to report. Sue Wagner has been approved to be placed back on the list for liver transplant. Sue is the daughter of Johnny and Ann Calihan. Sue has a long and rocky road ahead of her, so maybe she will get able to enjoy life again.

Johnny and Ann are doing alright. They are trying to stay warm. Thank God they got their furnace fixed and it was still under warranty.

Once again, I haven’t checked in with Les and Pat Wagner. It seems the day passes and I don’t seem to get anything accomplished. I hope they are staying warm.

My daughter Anna Nottingham is doing alright since her heart attack.

Three o’clock this morning I heard a noise at the corner of my house. It scared me, yet I didn’t want to wake Keith up. I heard it again then silence. When Keith went outside to start his truck, and to make sure my car doors would open, I told him what I heard, saying I was going to see if there were tracks by the window. Keith came in to tell me there were deer tracks, evidently it had hit the antenna disk to the television.

Sometime ago I received an email from Lavetta Fonda Martin, from Viper. As I was clearing off messages on my email, I decide to send Lavetta a message along with my phone number to see if she was still at the same email address. Lavetta is the daughter of Carl Coots, who is a first cousin to my mother, Ora Hall. Carl and his sister Betty Coots Hatton were like brothers and sisters instead of cousins while growing up on Big Branch.

Lavetta called me, and it was so good talking with her. It is always a surprise to me that I still remember the conversations with my mom about her childhood

Well, I have to get this on its way as all of a sudden I am not feeling well. Until next time, Rose Ballard, 9110 Lawrenceburg Rd., Harrison, Oh. 45030, email: Bluegrassmama4@aol.com.