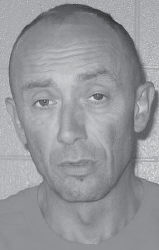 Police in Letcher County have arrested a northern Ohio man who is accused of murdering a woman and leaving her body burning in a wildlife refuge.

“I think every officer in Letcher County was looking for him,” Letcher County Sheriff ‘s Deputy Michael Burton said of the accused, 50-year-old Timothy Keith Tyree of Sandusky, Ohio.

Burton and Whitesburg City Patrolman Tyrone Fields arrested Tyree on May 6 after finding him at Dry Fork in a minivan which belonged to his alleged victim, 32- year-old Charlotte Nicole Evans, a mother of two from Carey, Ohio.

“He said he was resting there for the night and he gave us no trouble,” said Burton. “It was ‘yes sir, no sir,’ from there on.”

Captain Paul Sigsworth of the Erie County (Ohio) Sheriff’s Department said he had received tips that Tyree was “probably down in that area.”

Burton said Tyree has cousins who live in Dry Fork and Isom.

“Within a couple of hours of contacting the sheriff’s office they had him in custody,” said Sigsworth.

Tyree is being held in the Letcher County Jail pending his extradition to Ohio. Bond is set at $100,000 cash.

Burton arrested Tyree after charging him with receiving stolen property since the green 1996 Plymouth Voyager minivan belonged to Evans.

Evans’s burning body was discovered by two men in the Resthaven Wildlife Area near Castalia, Ohio at 1:20 p.m. on May 4. Her death appears to have been caused by blunt-force trauma to her head.

Evans and Tyree met about two months ago. The pair, who had visited Letcher County together, apparently began staying in the wildlife area after Tyree moved out of a homeless shelter in March.

“Evans and Tyree were basically living in that van together, off and on in the wildlife area,” said Sigsworth. “We had a couple of incidents that were logged where they were found in the van at the wildlife area and were told to move. We’ve had folks in the public tell us they have recently witnessed acts of domestic violence or threats of domestic violence being committed by him against her.”

Tyree was indicted by an Erie County grand jury on May 7 on charges of aggravated murder, murder, aggravated robbery, aggravated arson, receiving stolen property, tampering with evidence and gross abuse of a corpse.

The News-Messenger of Fremont, Ohio reported that Tyree was convicted on a charge of forgery in 1993 or 1994 and served a year in jail.

The newspaper reported that in January 1994, Tyree served five days for assault in Tiffin, Ohio, and was arrested six months later for theft. In May 1997, Tyree was convicted of felonious assault in Seneca County, Ohio, and sentenced to six years in prison. In August 2006, he was convicted of vandalism in Seneca County and served six months, the paper said.

Tyree’s most recent conviction came in August 2007 after he tried to entice a 12-year-old newspaper delivery girl into a garage.

Evans’s two children live with her mother The minivan was towed back to Erie County on May 8 to be held as evidence.