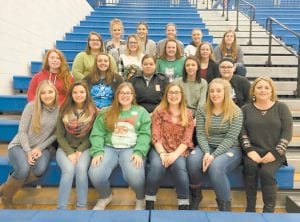 Hello everyone! Once again we are having springlike weather after 11 straight days of rain in some form, either pouring down or a light drizzle.

As I was looking out my front window the sky was so dark, a few minutes later I walk in my kitchen there’s a ray of sunshine so bright, and then all of a sudden it is raining with the sun shinning.

One day this week it was so warm you could be comfortable in a short-sleeved shirt.

In fact it has been very nice today. I saw a couple of kids out in shorts. I think that is rushing it a little, but it was supposed to get in the upper 60s Saturday and Sunday.

I’ve had to almost glue my feet to the floor as I want to head for the hills I call home.

I haven’t felt very good for the past couple of weeks, although I can’t use that as an excuse as I’ve got in my car and started out when I had to keep a bag handy in case I started getting sick before I could pull over.

Friday morning, while driving on Rt. #50 towards Cleves, there was a pickup truck on the railroad tracks. It had small steel wheels behind the regular tires so it could run on the rails.

My thoughts started going back in time as I have read and heard how men would take the tires off of their trucks and run them on the railroad back in bygone years around Roxana.

I’ve never seen this done, but when they couldn’t get coal or had to move and there were no roads they would use the tracks.

There are railroad tracks not far from where I live, and once in a while I can hear a train blow as it approaches the crossing.

How many remember the engineer waving as the train passed through small towns, and the red caboose at the end? I loved to watch them as they passed by.

Friday evening wasn’t as nice as Friday morning. After I came home I laid my keys down on the passenger seat, picked up my purse and walked on the porch to unlock my door. I knew before I opened my purse what I had done. Yep, I locked my keys in the car.

Lucky I had an extra house key in my purse.

I called the Hamilton County Police to see if they could open my car door. The dispatcher said he would send someone.

I called during shift change and it took a little longer for someone to respond. It became dark so I called back to the dispatcher and told her to cancel, that I would call Saturday during daylight.

Saturday morning once again I made the call for help. The dispatcher told me he had sent someone to unlock my door, and I replied that I was sorry, but no one came. He said he would send someone right away. In the meantime I waited, and then a local Harrison Police cruiser came to my rescue. As the county was so busy, the dispatcher called Harrison.

As I was telling the Harrison officer there was a mix-up at Hamilton County, I looked in my car and my keys were in the driver’s seat and my car door was partly ajar.

The officer evidently didn’t knock on my door to tell me, so he thought he had helped me. What he didn’t realize is, even though the car door was partly open, it had locked again.

Sunday afternoon I ventured to an event called JAM-U-ARY which is held in a church. It is an annual event held each year in January. It has been going on for about five years now, maybe longer.

I went the first year, then things happened so I never attended until this past Sunday. As usual I wasn’t feeling up to par, but I decided to go anyway. I can truthfully say I am glad I did. I called Vicki Power to see if she wanted to go, but Vicki was tired so again I was on my own.

Matt Glazer who helps put this on was propping the door open as I arrived. Now I know what a bear hug feels like as I haven’t seen Matt since the first time this event has taken place.

As the musicians came in I received more hugs since I’ve not been anywhere to see anyone in so long.

I sat with a couple and I asked if they were from that area. To my surprise the woman lived in Ft. Mitchell, and knows my daughter Anna Nottingham.

I laughed and told her not to tell Anna she met me at a bluegrass event or Anna would not want her for a friend.

Lanette took a picture of us together and sent it to Anna. Lanette plays guitar and so did her friend that came with her. We talked for a while then more musicians started coming in.

I can’t pick a lick as everyone knows, but everyone has always treated me with so much respect as they know how much I enjoy music.

As I sat and listened I let my thoughts travel back a ways to when I first started going to music places.

I went to a place called Famous Old Time Music in Cincinnati, owned by Vernon and Kitty McIntyre. Two young boys about 15 or 16 years old would come in. One had a guitar and the other a banjo. They were very good.

The guitar player, Brad Minerding, is a very accomplished musician as he can play any kind of music and is a very good singer. Brad is now 36 years old and such a nice young man.

I was going to mention the names of the musicians that I knew at that this event, but that really isn’t relevant.

There were a scant few who came to listen. The musicians gathered in a huge circle to pick and sing.

Finally three of my most favorite musicians came in, none other but Ma Crow, Margie Drees, and Vicki Abbott. Trina Emig had other obligations so she wasn’t there.

I began to feel so bad I knew I should go home, so I went downstairs. That’s as far as I got as Ma, Margie, and Vicki were in a small room playing music. Well, I sat down and enjoyed a private time of listening to the girls sing and play.

A couple more musicians came to join them too. It was getting late and I decided to come home.

I need to get out more often as it made me realize how much I have missed music and being with everyone.

Oma Hatton, I love your column. No, I am not having too much fun, but that is going to change. Maybe I will get to see you this spring, and this time I will call before I just pop in.

Oh you didn’t remember where you were when I came to visit you. My dear Oma, you were celebrating your birthday with your family as they held you a surprise birthday party. Had I known this was going on I might have crashed your party.

Evidently your brother didn’t know about it, as he was the one who said you always come straight home after church.

Les and Pat Wagner are doing great as I finally caught up with them. Johnny and Ann Calihan are doing fairly well also.

I plan to go visit Doyle and Betty Ison before long.

Sunday morning while carrying things from my car into my house, I decide to take a nap on the pavement again. Needless to say I have a bruised knee. I don’t understand what is causing me to fall. Of course I had my hands full.

Ricky Caudill has sort of been under the weather again as the stomach bug is bothering him.

Val Ison, I enjoyed the short video of you and the girls. It brought back memories when my daughters were younger. My thoughts are with you more than you know.

Hello Mike and Marcia Caudill I am looking forward to the first square dance of this year — that is if I haven’t fallen and broken a leg by that time.

Hello Bill and Betty Kelly. Their son Barry Brown is recovering from his fall a couple of months ago.

Linda Hall, I miss hearing from you, I hope you are doing alright.