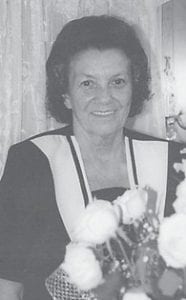 She was a member of the Mayking Baptist Church and the Hester Chapter #54 Order of the Eastern Star.