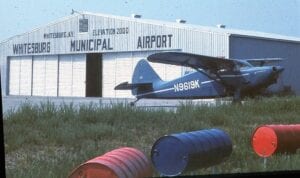 OLD WHITESBURG MUNICIPAL AIRPORT – This photo taken August 29, 1969, by Linc Reed-Nickerson shows his 1947 Stinson Voyager in front of the Whitesburg hangar. Reed-Nickerson landed there after learning the Bluefield, W.Va., airport was fogged in. This photo appears on the website “Abandoned and Little Known Airfields: Eastern Kentucky.”

Flying into the Whitesburg Municipal Airport could be a harrowing experience. Flying out wasn’t always much better.

“On a calm day, it was nothing out of the ordinary. It was no different from any other 2,500-foot runway,” pilot Rick Caudill recalled. “On a windy day, it would become a whole different story.”

The old airport closed in the 1980s, and the Federal Aviation Administration moved its VORTAC navigation system to Hazard in 1987. The Whitesburg runway, designated BRG, is still there, one ridge over from the proposed site of a new airport.

Like the old one, the new airport is to be built on a former surface mine. Construction began on the old airport in 1963, and it took four years before the finished product took shape.

The tiny runway barely fit on the leveled mountain peak, and there were sharp drop-offs at both ends. Those were prone to updrafts, downdrafts and crosswinds, and Caudill said, it could be challenging on a blustery day.

Roy Crawford III’s engineer father was instrumental is creating the airport. The older Crawford kept a plane at Wise Airport before the hangar was built at the Whitesburg site, and took his teenage son up in a Piper J-3 to learn how to fly.

“I landed up there before it was paved,” Crawford III said.

He never went on to take his pilot’s license, but he said he often flew while his father, a flight instructor as well as an engineer, slept in the copilot’s seat.

“It was kind of funny because we’d be flying through the valleys, and we had to climb to land,” Crawford said.

Like Caudill, Crawford said the runway’s 2,000-foot elevation made it a challenge to take off, and especially to land.

“You had to make sure you stopped,” he said. “One person went over the hill at the end of the runway.”

Pilots liked the airport in general, because it was so high it was available for takeoff and landing when the others in the area were fogged in. Opened officially in 1967, it had an 8,000-square-foot hangar that could house up to 15 small planes, a lounge, telephones and gas pumps.

Crawford remembered his dad, a one-time chairman of the airport board, sending him up to the airport to work as a punishment because he had missed his curfew at home. He spent long days there helping Italian immigrant Joe Romeo, a well-known stone and concrete mason, lay the foundation for the hangar.

The airport remained in use for about 20 years, but it was small, and it had no one to stay there 24 hours a day. Pilots became afraid to leave their planes there because of vandalism. Larger airports were built nearby and thieves stole everything that wasn’t nailed down, and some things that were. The metal hangar, for example, disappeared when thieves tore it down, loaded up the scrap and hauled it away.

But before petty criminals took over, locals could still learn to fly there, and learned to land on a runway some said was “like landing on an aircraft carrier.”

Hobbyists flew remote control airplanes there in the early morning, and local business owners partnered to buy airplanes and learn to fly them.

Jim Craft, who owned Craft’s Department Store on Main Street in Whitesburg, bought a plane with two partners, and learned to fly at Whitesburg under the tutelage of Roy Crawford Jr., but never took his flight test.

Craft recalled when he learned to fly in the mid-1980s, there was a lot of surface mining going on close to the airport, which could also lend to the excitement of flying in and out of the airport.

“I had just taken off and somebody set a shot off at the end of the runway,” Craft said. “I thought, gee whiz, I’ve been bombed.”

Others caught the flying bug at Whitesburg and not only went on to become licensed pilots, but made careers of it. Mike Majority, whose father, Frank, was deeply interested in aviation, mowed grass at the airport and took care of building maintenance as a teenager in the late 1970s and early 1980s. He went on to become an Air Force fighter pilot, and military flight instructor. He retired from the service.

“I remember the opening (of the airport) because Dr. Musgrave flew his DC-3 in there, and it was a big twin-engine,” Majority said. There were hotdog vendors, an air show with aerobatics and airplane rides.

“First, I was scared to death, and then I couldn’t get enough of it,” he said.

In his teenage years, part of his job was to mow the grass on a 42-inch riding mower.

“That runway was 2,550 feet long and 75 feet wide, and it took a while to get around that. You’d come back sunburned,” he said, laughing.

The City of Whitesburg also hired him one summer to do a survey of the aircraft that used the field, and he was shocked by the number of business travelers with coal companies and others that flew in and out.

“I didn’t think there would be much going on, but it was a busy little place,” he said.

After completing Air Force ROTC and receiving his commission, Majority came back expecting to see the airport as it was.

“I rented a plane at Wise and flew over it, and there was nothing,” he said, adding that he had been told vandals even tore down the lounge and carried away the bricks.

Craft, who is now retired, has mixed emotions about a new airport, as well as other projects underway here.