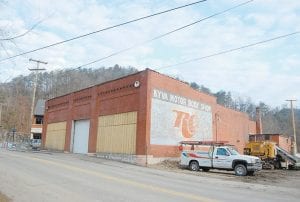 Mayor James Wiley Craft is again warning the Letcher County Conservation District not to begin tearing down any portion of the old KYVA Motor Company Building the district owns in downtown Whitesburg.

"The first person who moves a brick without permission from the City of Whitesburg goes to jail," Craft said after learning that members of the conservation district’s board of supervisors believe they can ignore a 2007 moratorium against working on historic building located on Madison Street because Craft didn’t put his earlier edict in writing. "I am to see those plans before the first stone is turned because it is a historic building and it is not to be lightly changed."

Ron Brunty, chairman of the conservation district board, said that because Craft never put anything in writing ordering the moratorium, he thought the district could move forward with its project. The district bought the KYVA building in September 2006 for $85,000 and later decided it would be more feasible to tear it down and rebuild.

This past fall, the conservation district selected Kenar Architectural of Frankfort to design a new office building. It remains unclear, however, exactly what the district has in mind as far as the construction project is concerned.

The KYVA building was built more than 80 years ago and is one of several downtown buildings placed on the National Register of Historic Places two years ago as part of the Whitesburg Historic District listing.

Craft said that as long as the look of the building’s exterior remains the same he does not have a problem with construction.

"Their obligation is to incorporate the facade of that building into the new one," said Craft.

When conservation district board members met with Kenar Architectural for the first time on January 6, Brunty said, "Our belief going into this is we don’t have adequate funds to remodel."

Brunty asked during the meeting if any of the existing building could be salvaged, including walls, material or steel. Kenar’s Harold Fletcher Jr. said he could have brick analyzed to see if it is salvageable.

"That’s why you are tearing it down, because it is not cost effective to use the building," Fletcher said at the January 6 meeting.

Kenar was officially hired on January 8. Brunty said Fletcher should have plans and maybe even a rendering to show at the board’s meeting set for February 12 at the conservation district’s office.

According the National Register of Historic Places, the KYVA building was constructed in 1925 and "was the local Oakland, Willis and Pontiac auto dealer and also sold International trucks."

After buying the building, the conservation district discovered that renovating the building would cost more than $400,000, according to Brunty. Brunty said it would cost $158,000 just to repair the walls and floor, which he says would just be for the cost of materials and doesn’t include the cost of labor.