Old building to get new facelift 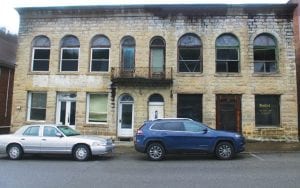 One side of the W.E. Cook Building on West Main Street in Whitesburg is undergoing interior demolition in preparation for remodeling. The building, which was constructed in 1914, is actually a duplex with two entirely separate backs, last housed a dentist’s office in the side currently being remodeled. Richardson Associates Architects was in the other side. The side being repaired has been empty and in disrepair for decades. It was home to The Mountain Eagle in the 1970s, when the paper was the victim of arson. According to city officials, the two buildings had been owned by two siblings. Josh and Whitney Howard, attorneys from Pineville, bought the right side of the building, but the left side was not sold. Workers began tearing out the interior of the building on Friday in preparation for office and apartment space. (Photo by Sam Adams)