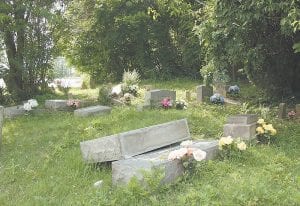 VANDALS STRIKE OLD CEMETERY — Pictured here are just a few of the 28 grave markers that were broken or uprooted by vandals who hit the Blair Cemetery near Pine Mountain Junction in Whitesburg sometime between April and Memorial Day. Police are still looking for suspects. (Photo by Ben Gish)

Police are still trying to determine the identities of vandals who damaged or destroyed at least 28 grave markers, some of them more than 100 years old, in one of the county’s oldest cemeteries.

The Blair Cemetery, located near Pine Mountain Junction in Whitesburg, was vandalized sometime between the April, when it was mowed for the first time this season, and Memorial Day.

Nearly a month after the damage was discovered, the cemetery on Tuesday still looked as if an explosion had been detonated nearby. Heavier “new” stones lay broken from their bases, while older stones — some flat rocks with names carved into the them — were uprooted from the ground.

Known as the Blair Cemetery, the graveyard is located on property adjacent to Childers Oil Company and has been in operation since the 1700’s, said Mrs. Paul Pigman of Whitesburg, whose great-greatgrandparents are buried there.

Persons with information about the vandalism are asked to contact the Letcher County Sheriff ’s Office or Whitesburg City Police.

Meanwhile, descendents of people buried in the cemetery are being asked to donate money to help meet the cost of repairing the damage. The Letcher County Historical Society is overseeing the repairs.

Family members or simply citizens who want to help preserve the county’s history may send their donations to: Letcher County Historical Society for Repair of Blair Cemetery, c/o Zandra Perry, 16 Dogwood Drive, Ermine, Kentucky 41815. A large number of veterans are buried in the Blair Cemetery.