Old engine once a fixture in Jenkins area 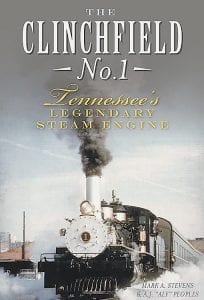 The cover of The Clinchfield No. 1: Tennessee’s Legendary Steam Engine.”

Editor’s Note: Many people in Letcher County, especially those in the Jenkins area, will remember the historic steam engine, the Clinchfield No. 1, which made passenger excursions in the 1960s and 1970s from Elkhorn City to as far away as South Carolina, and during those years pulled the famous Santa Train.

Rarely has an American success story had as many twists and turns as that of the Clinchfield No. 1, a plucky little steam engine that found national fame and adoration in the 1960s and 1970s along Appalachian mountain railroad tracks – and far beyond.

In The Clinchfield No. 1: Tennessee’s Legendary Steam Engine, authors Mark A. Stevens and A.J. “Alf” Peoples tell, for the first time anywhere, the everyday stories that made the locomotive a fabled symbol of survival and revival.

Published by The History Press, the book features nearly 80 vintage photographs, many never before seen by the general public. Many of the stories, too, will be new to readers and railroad enthusiasts despite decades of massive media coverage from publications such as The New York Times. 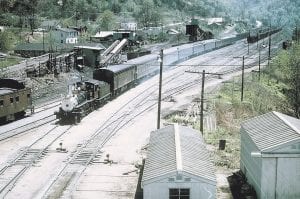 The Clinchfield No. 1 and its famed excursion train entered Elkhorn City with brakes smoking after coming down the steep grade. (Photo from the David Kistner Collection)

“The story of the Clinchfield No. 1, including how it was rebuilt in 1968 to lead excursion trains throughout the South, had been well documented over the years,” Stevens said, “but Alf and I wanted to explore the stories behind the story. In particular, we wanted to tell the stories of the men who shaped the steam engine’s life on the rails.”

In fact, the new book came about after Stevens and Peoples produced, in 2013, a limited-edition pictorial history book about the No. 1 titled The One & Only.

“There was such an outpouring of interest, Mark and I quickly realized that there was more to do if we were to really tell the No. 1’s whole story,” said Peoples, who retired in 2014 as a locomotive engineer after a 45-year career on the railroad.

The steam engine was built in 1882 in Logansport, Ind., as a 10-wheeler, 4-6-0 and led the first relief train to reach the victims of the infamous 1889 Johnstown, Pa., flood. In the late 1800s and until the 1950s, the locomotive spent many decades helping to build the Clinchfield Railroad and working deep inside the forests of the Appalachian mountains hauling timber and feldspar.

But the steam engine story turned from that of a forgotten and forlorn workhorse to a celebrated fable in 1968 when Clinchfield Railroad General Manager Thomas D. Moore found the locomotive, already an antique, in a ruin of rust and rot in the Erwin, Tenn., railroad yard. Moore, a railroadman with a businessman’s vision, ordered the engine to be rebuilt to lead excursions from Kentucky to South Carolina.

It was a daring and audacious plan, as steam engines had long bowed out of service in deference to their modern diesel counterparts. Passenger service for many railroads, including the Clinchfield, had been shuttered years before.

Now, utilizing invaluable materials available at East Tennessee State University’s Archives of Appalachia and through a series of interviews, Stevens and Peoples have pieced together the captivating story of the real-world little engine that could. The book captures the spirit of railroaders who worked to turn an antique steam engine into the nation’s oldest working locomotive. Those interviewed include 94-year-old George Hatcher, who served as fireman aboard the No. 1 for 11 years, and current U.S. senator and former Tennessee Gov. Lamar Alexander, who rode behind the No. 1 in 1972 and 1978 as part of a whistle-stop campaign launched by U.S. Sen. Howard Baker Jr.

The Clinchfield No. 1 spent 11 years garnering glowing reviews from an adoring media as the steam engine and its excursion train returned passengers to a bygone era.

The New York Times wrote, in 1969, “The Clinchfield Railroad, which had abandoned its last passenger train in 1955, has found a new way of making money out of passenger traffic: put an 1882 steam locomotive out in front.”

Tens of thousands of passengers rode behind the No. 1 during the excursion years and before the locomotive’s retirement to the B&O Railroad Museum in Baltimore, Md. The stories of passengers, through interviews and original correspondence between passengers and Clinchfield Railroad officials, preserved in the archives, are used to detail the No. 1’s history.

Stevens, who spent 25 years as a newspaper editor and publisher in Tennessee and Louisiana, said he recognized the No. 1’s immediate appeal for storytelling: “The No. 1 had it all – intrigue, rebirth and revival mixed with sadness, anger and celebration.”

The Clinchfield No. 1: Tennessee’s Legendary Steam Engine will be available soon for purchase at local bookstores and online at Historypress.net and Amazon.com. Autographed copies can be ordered directly from the author by sending a check or money order for $19.99, plus $4 for postage, to Mark A. Stevens, 390 Lumbee Circle, Pawleys Island, SC 29585.