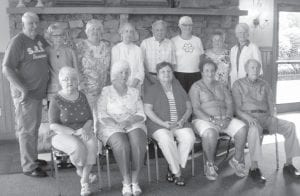 I received a sweet letter from a friend in Arizona who gets The Mountain Eagle, Susie Franklin. She told me about some news that broke my heart.

One of my best friends, Judy Lovely ( Cornett) Combs, had lost her daughter, Myra Lynn, who used to live close to me in the 1960s at Linefork.

Her first husband was J.G. Cornett, a son of Frank and Thelma Cornett. They lived by Thelma and they had three children at that time, Barry, Mark and Myra. I used to go visit her a lot. She was a wonderful friend. I had four sons at that time.

We would go out to the old Kingdom Come High School gym and play and dance, and let the children play games.

We had other dear friends, Sally Huff, Vivian Halcomb, Virginia Hall and my nieces and sisters-inlaw and my sisters.

Myra was a beautiful little baby girl. We all loved her and helped tend to her.

J.G. and Judy decided to move to Michigan and I truly missed them so badly. They wanted Claude and me to come there to live, but Claude got a job in Marion, Ill., in the mines and we moved there.

We kept in touch, but all that changed. Susie told me in her letter that Myra had died on July 9. J.G. had called her and told her.

It broke my heart to hear such awful news. He told Susie that Myra had suffered awful bad from the diagnosis for five weeks, and then she died.

I know Judy must be devastated. She and Jay were divorced years ago, but we kept in touch with her last husband, who died last year.

I wrote to her, but my letter came back. I don’t know where she is now, but I hope she’s doing good by now. May God be near her always.

Susie’s mom was one of my schoolteachers at Kingdom Come. I loved her. Susie was very young and her dad was the mail carrier from Linefork to Cumberland every day. They were Arnie and Ethel Franklin. They are deceased now.

Susie married and lived in Mesa, Ariz. Her husband sings. She sent a recording of a song and his music through her dad. It is named “Harlan County Line.” He is good at that.

I was so pleased to hear from her and get the song he made up of Arnie. His name is Darion.

When she wrote it was 103 degrees. They are in their 70s now, and she gets The Eagle. She loves it.

J.G., if you get this Mountain Eagle, let me hear from you. I want to know about Myra and all the other family members.

I’ll always remember you and her when you got married. She was so beautiful. You were so proud and handsome when you brought her to a ball game one night at K.C.H.S.

Judy once told me that your younger son, Greg, is a minister. That was good to hear.

We miss all the people we used to know. Your mom’s store and your house are all gone. The old school is gone. It is sad that all my friends have died or moved away.

My brother Emory lives in Indiana. He is really sick. Elmon does fair, and Georgia and Judith are doing fair but have their problems and aches and pains.

Susie, write me again and tell me all about your mom and dad and your family. I love all. Your mom taught me some cooking lessons, she was a good cook.