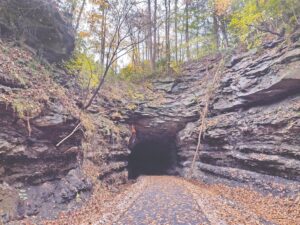 NEW ASPHALT LEADS into the 110-year-old abandoned railroad tunnel near the Whitesburg River Park. The tunnel has been added to the Tanglewood Trail, a path that leads from the park to the shopping center on the west end of town. (Photo by Sam Adams)

Paving of the abandoned railroad tunnel on the Tanglewood Trail near the Whitesburg River Park has been completed.

The paving is part of a $25,000 Community Challenge Grant from AARP obtained by Appalshop, which is partnering with the city and the county Tourism and Convention Commission to improve the downtown area. The groups have raised a little over $11,000 toward another $25,000 required to match the grant.

The grant was one of 244 awarded across the nation by AARP, and one of five in Kentucky.

The paving project also included surfacing of the trail through the Upper Bottom Community.

Alexandra Werner-Winslow, communications director for Appalshop, said the arts collective applied for and received the grant as part of downtown revitalization efforts. The money will pay for the paving, four custom-made steel benches from the Rustic Rooster at Kona, and 40 paintings from local artists that will be stenciled on the pavement.

“Future plans that have not been done include extending the trail to the top of Pine Mountain,” Werner- Winslow said.

The trail will be open for biking and hiking, but not for motorized traffic.

The grant will also pay for development of a crosswalk to make it safer to cross KY 15X (Hazard Road) between the Housing Authority of Whitesburg and the street leading to Food City, Mountain Comprehensive Health Corporation and other businesses in the old industrial park.

The tunnel has been of major interest to people who use the trail since it was first announced to be added to the Tanglewood Trail in late 2019. Work began in October 2020 to removed dirt, rocks and debris that had been used to close off the entrances to the tunnel, and to build a trail on the east side, where the railroad right-of-way was sold off in the late 1980s, leaving a dead end.

Rather than following the old railroad, the east end of the trail follows the North Fork of the Kentucky River downstream to the end of River Park opposite the tunnel, making a loop for walkers and bicyclists.

That end of the trail has not yet been paved and, according to Tourism Commission Chairwoman Missy Matthews, weather might prevent it from being finished until spring.

“The remainder of the trail is too soft to compact at the moment,” Matthews said. “If we get enough dry weather then it could happen this month, but not likely since the blacktop plan typically closes the week of Thanksgiving. Spring is my best guess for completion.”

The tunnel passes through what is now known as Tunnel Hill, deep under the driveway to Whitesburg Appalachian Regional Hospi tal . It connects Whitesburg and Ermine, and was once the site of the William S. “Bill Dug” Vermillion farm. The hill was called The Dug Hill in earlier times. Construction of the tunnel began in November 1910, soon after the L&N railroad, through its recently purchased L&E railroad, bought property to extend its line from Jackson to McRoberts.

The tunnel was carved by hand out of solid rock by more than a 100 Black laborers recruited from Alabama and other southern states by W.J. Oliver and Company.

On November 10, 1910, The Mountain Eagle published a story entitled “The Colored Man Arrives,” in which local citizens were called upon to welcome the 125 or so black men and women who had arrived to work on the Dug Hill tunnel. The report said the workers arrived “travelworn, dusty, sick and hungry, in wagons, dump carts, wheel scoops, horseback, straddle back and afoot.”

Within two years, the railroad line was finished to Whitesburg, and workers had moved up the line toward McRoberts.

According to Wikipedia, W.J. Oliver and Company also built the railroad tunnel through Lookout Mountain in Tennessee, and was the initial winning bidder for construction of the Panama Canal in 1907. The bid award was controversial because of comments company owner William Oliver made publicly, stating that he preferred to hire Southern Blacks because he felt they were better workers than people from China or the West Indies. The government later decided not to use a contractor, and Oliver lost the bid.