Old-time candies were the best 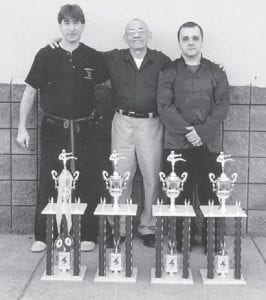 Master Frank Sexton of John Ng’s Four Seasons Kung Fu and Tai Chi of Whitesburg, Pikeville and Hazard, and Aaron Adams of Whitesburg, competed in the Somerslam open martial arts tournament in Somerset. Sexton and his students will complete in several more state, regional and national tournaments during the years. Sexton was asked to join the U.S.A. World Competition Team, which will be traveling to Italy to compete in the world championships. He said he thanks his teacher, Great Grandmaster John Ng, for the knowledge and training and support that Ng has given him. Pictured are (left to right) Sexton, Ng, and instructor Aaron Adams.

As I sit at my computer desk looking across the hayfield it is so beautiful and dawn is just stating to show.

Is it spring or winter? Everything is so beautiful; the grass is so green and every floral tree is in bloom, along with several beautiful flowers.

Irises are starting to bloom then wham, we get a hard freeze. Mother Nature it isn’t nice to play tricks on people! I will probably have to order propane before the end of the cold weather. Oh well, I did without a furnace all through winter a couple of years ago, so why am I complaining?

I was wanting something sweet and of course noth- ing in the house, so my thoughts returned to candy of long ago. Who remembers penny candy? Such as BB Bats, Kits, Mary Janes, then the nickel candy bars, such as Payday, Milky Way, of course Sugar Daddy, and then something called Necco Wafers that came in a roll, and all time my favorite Snickers.

Now it cost almost a dollar to buy a bar of candy, with not near the flavor as it used to have.

Burke’s Grocery at Roxana used to sell a soft drink called Grapette. Oh what I wouldn’t give for just a taste.

Dad never bought us kids soft drinks, but once in a while we could find enough pop bottles to cash in to buy one, and it was such a treat.

When I first came out here from the mountains, there was a store in New Trenton, Ind., that sold soft drinks in a Coke cooler with water in it. The sodas were so cold and delightful to drink. I can remember it having Nehi drinks such as orange, grape etc.

While driving in downtown Cincinnati I saw an advertisement for R.C. Cola. It brought back memories of R.C. Bottling on the outskirts of Whitesburg.

I bought Moon Pies not long ago, and they were nothing like the old ones.

Now I may as well take this conversation a little further.

When my children were small, on a hot summer day their dad and I would take them on rides in the country. We would stop at a store, buy a loaf of bread, bologna, a bag of chips, and a bottle of soda and split with the kids.

That was long before McDonald’s or Burger King or any other fast food places were in existence in this area.

There are times I hear people talking or read about the ingredients that go into making bologna and hot dogs and it makes me nauseous.

Yet I long for a good thick piece of bologna. Of course like a lot of other hillbillies, I love fried bologna sandwiches.

Now on to something a little more interesting. Once again Les and Pat Wagner spent a few days in the mountains, and I received a picture from Les showing how beautiful it is down home.

I wanted so badly to head for the hills I call home for Hillbilly Days, but I am going to bypass it this year as I am too weak to drive that far and walk the distance to the festivities from the parking areas. It really is hard just sitting and not being able to dance.

Doyle and Betty Ison are trying to stay warm as we hit a snag in the nice weather we had for a few days.

My granddaughter Jodi Gray, who is a first-time teacher at Orin Academy, had her second grade class receive recognition.

Jodi was in for a surprise as a superior in teaching came to observe her class, and told Jodi he had been hearing rumors and wanted to see for himself. The man videoed Jodi, then used it as an example in Dayton. He was so impressed with Jodi’s techniques, saying Jodi had accomplished more in her first year of teaching with her students than some teachers who have been teaching for two or three years.

Oh yes, I am a proud grandmother. I am proud of all my grandchildren, and knowing Jodi is a teacher pleases me beyond words.

My granddaughter Sarah Nottingham will be graduating from high school this year. It is hard to believe she is soon going away to college.

My little sidekick Bennie is still so thin as he is such a picky eater. Bennie loved the mushroom and Swiss from Hardees, which I brought him last October. I was looking forward to buying him another if I made the trip to the mountains for Hillbilly Days, so I guess this won’t be happening.

Ricky Caudill sure is enjoying the beautiful view from his new house, although it was beautiful from the old homeplace too. Ricky, along with his sister Marcia Caudill, enjoyed a day out together.

Nina Cornett, thanks so much for your beautiful pictures on Facebook. It was a pleasure meeting you and Dean.

Betty Kelly is still relishing in her recent trip to the mountains with her three grandsons. I am so glad she had the opportunity to go, and to spend time with her grandsons to let them see where she grew up.

Well, I am tired so until next time.