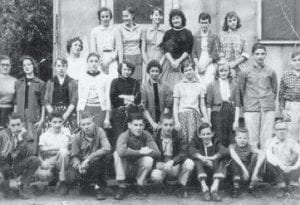 Hello again everyone! I hope all you moms and grandmothers had a very nice Mother’s Day!

My husband, Clayton, and I went to the Olde Star Theater located between Dry Ridge and Williamstown. J.D. Crowe & The New South was the featured band. It was a sellout! I enjoyed this show of J.D. and the guys more than I have ever liked any of his shows!

Ricky Watson always does a good job singing, and Ronnie Stewart was on the fiddle, Of course J.D. is great on the banjo. The opening band was The James Family; they did a good job.

Clayton Durham & The Bluegrass Addition will be playing at the Olde Star Theater May 19, along with Cecil Jackson & Dry Ridge Band. This will start at 7 p.m.

Old Time Fiddler’s Day was held at Miamitown, Ohio. There was a nice crowd, the day was beautiful, and the music was very good. Clayton Durham & The Bluegrass Addition did a great show. Doyle and Betty Ison from Aurora, Ind., and Bill Hill and Dessie Larins came to the show. Dessie hasn’t been going out too much since her hip surgery a few months ago.

I did miss a very special person, who happened to be passing through Miamitown, saw a band performing on the gazebo, and decided to stop. It was a friend of mine that I haven’t seen in about eight years. She goes by Ma Crow, and has a band called Ma Crow & The Flock!

I met this delightful and talented woman in 1994. She is a beautiful person. When I first met her, I had no idea she was a singer and had her own band. as she did no bragging on herself. I was at a bluegrass festival in northern Kentucky, actually it was the first bluegrass festival I had gone to.

Ma Crow was there and, being the mouthy person I am, we started talking. When they called her up to sing, I could have fainted with surprise. She has a couple of CD’s she has released. Of course when she found out that I had published a book called The Beauty of a Rose, she was just as surprised about me. We have lost contact over the years, as life goes on and you go your separate ways.

So when she stopped by to listen to the music, she talked to Roger Huron, who was playing the fiddle for Clayton’s band. After we were home, Clayton asked me if I had seen Ma Crow! I was really disappointed. It took me two days to find her.

I finally remembered a place she used to play in Cincinnati. I was really pleased the man gave me her home phone number. When Ma called me back, she said she is having a rough time as her son is in Iraq. So keep him and all the soldiers in your prayers. She helped me through some bad times in my life, so maybe now I can be of some help to her. We are planning to get together in a few weeks.

I hope to visit my friend from long ago, Shirley Wells. sometime this summer. It has been about 47 years since we have seen each other.

Gwen Huff Farmer’s son, John Farmer, has been in another fishing tournament. John always fishes a couple of days before the tournament. He was too far away from Gwen’s to come stay with her. I know Gwen always enjoys having John and his fishing buddies stop by her place when they are in the area.

Shirley Wells has been kept busy going to birthday parties for her grandchildren. She went to Chuckie Cheese for a birthday party for her little grandson, Sheldon. A good time was had by everyone, especially the birthday boy!

Shirley was going to Erin, Tenn., to another birthday celebration for her grandson, Tyler. Belated birthday wishes to both these young lads!

Betty and Doyle Ison had a couple of special visitors stop by. Her grandson stopped by with his girlfriend on their way to the prom, Betty said they were so neat looking. Of course Grandma Betty is a lot like me, she couldn’t see for the tears filling her eyes for a while.

This is prom weekend for my granddaughter. Jodi Gray. It doesn’t seem possible she is graduating from high school. She will enter college in the fall at Ohio University; she plans on being a teacher.

My daughter, Kay, and her husband, Clarence Gray, traveled to Nashville, Tenn., for the weekend. They stayed at a luxury hotel with valet parking, room service and the whole nine yards. Kay said they found a nice karaoke place and she sang a couple of songs; several told her she was awesome. Kay has a beautiful voice.

This was the first time that Kay had gotten up in a public place to sing. Clarence sneaked and put her name down, then told her what he had done!

My son, Keith Ballard, and his friends went to St. Mary’s Lake; they had a good time, Keith caught 13 catfish. It turned cold while they were there. Keith enjoys fishing very much.

Ann and Johnny Calihan and their family had a wonderful trip to Washington, D.C. to see the War Memorial Monument. They did a lot of sightseeing. I hear Ann’s two daughters, Teresa and Sue, talked so much and giggled the whole time. Ann said it was if time had turned back and they were children once again.

Johnny was really pleased to be able to see all the names on the monument. Of course Johnny knows the sacrifices, as he is a veteran himself!. He really appreciates his children doing this for him.

I was pleased to see our little extra mountain mama Alma Whitaker’s picture in Oma Hatton’s column. I hope to be heading for the hills of home before too long, I think I will call Emma Engle and see if I can hitch a ride with her since she is heading that way for Memorial Day.

I did something for myself, I went to the local grade school and walked around the track bright and early. When I came home I sat on the porch for a few minutes. There was a noise and a bird came into the yard that I thought was a woodpecker, except this one was huge. My brother, Richie, said it was called a wood hen.

Hello to my sister-in-law, Wanda, and Bruce Jones and Levine! Barb Jones had to replant her peas since the freeze got them.

Ike Adams said his brother, Keith Adams, has peas blooming. Keith, you might want to send me a care package before you sell them all to Lloyd Brown’s grocery store.

Thanks, Shirley Wells, Betty Kelly, and Sadie Ison, for the beautiful birthday cards.

It is time for me to shake a leg and get this on its way to The Mountain Eagle. Seems like it has taken me forever to get it finished.