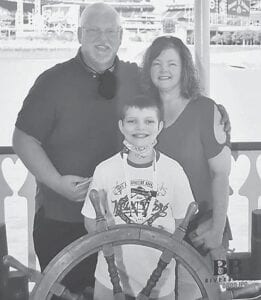 Happy 28th anniversary to Scott and Anna Nottingham who are pictured with son Kyle.

I don’t have to speculate fall is in the air, as it is like Santa Claus — it is everywhere! At least in this portion in the Ohio Valley area that surrounds where I live.

The air is so crisp I need cover when I do my morning ritual enjoying the birds. There’s a huge maple tree at the corner of my yard, leaves are starting to come cascading down. My beautiful petunias are looking so straggly, but I don’t have the heart to pull them out yet.

My son Keith Ballard spent a small fortune on black mulch trying to keep the weeds from coming through, which helped a little, except I don’t like black mulch, I am afraid some of my plants won’t reseed next spring. Keith has worked so hard in the yard this summer. Even I enjoyed trying to do a few things.

As I look across the hayfield there are two driveways that go to two separate houses hidden in the trees. The driveways connected with the road entrance are shaped like a heart.

The trees are still green with just a tinge of lighter green color. Really what makes it so unique, a tall bunch of beautiful of wild yellow blackeyed susans for my eyes to behold. 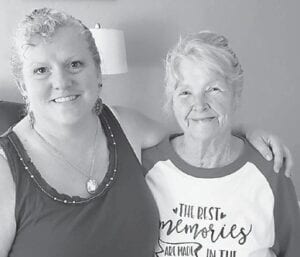 Carla Hollins McCoy is the daughter of Walter Hollins and granddaughter of Canvy Hollins. Canvy Hollins is the son of Harlan Hollins, who was a brother to Rose Ballard’s grandmother Rosa Hollins Hall. Rose Ballard says, “I didn’t realize that any of my Grandma’s relation lived anywhere close until about three years ago. I found Carla on Facebook and asked for information. On Sept. 7 I met Walter and Carla in person along with so many others.

It is so hard to stay positive when there are so many thing going on in this world, floods, tornadoes, and the raging fires that are taking homes, and so many lives. This coronavirus pandemic has taken over our lives and put most states and people in isolation, home incarceration. I am cautious and wear a mask when out in public, and I try to keep a distance in a crowd.

I am not telling my kids not to visit me, although my daughters and granddaughters have taken every precaution with me. They have visited when we are outside. What bothers me are the blessed older ones who are in the hospitals and especially the nursing homes, that are still mentally alert and left to wonder where is their family. No matter how good a nursing home seems to be, families definitely need to randomly check on patients who are there. 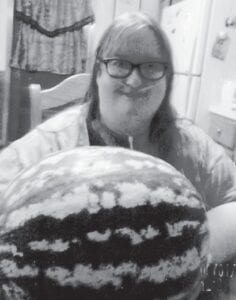 WATERMELONS — Grayson Holbrook uses part of her time during the COVID-19 trouble to raise watermelons to share with her family and neighbors. She has grown 13 watermelons already.

Personally I know what I am talking about, and I am not making this up as I experienced some things. Thank God I was still alert in my mental capacity, still had enough spunk, even though I was flat on my back, and couldn’t raise up without assistance, I let the nurse’s aid know I was in for my heart not my mind.

For those who read my column and know Johnny and Ann Calihan, Johnny is doing fairly well, now Ann decided to cause a little excitement, which could have had a serious outcome. Friday morning, Ann was in the shower and fell and some way she grabbed the shower curtain and cut between her thumb and forefinger. She had a previous appointment with her doctor who sent her straight to the ER, which is connected to the medical building where Ann was. Ann had to have CT scans of her head and other places, and two stitches in her hand. She is bruised badly, especially her tailbone area. The best part, there was no concussion, no broken bones. God was with her.

Thursday afternoon I finally paid Hayward Day a visit. When I arrived Hayward was in his beautiful yard sitting on a swing, oh yes I joined Hayward and we were just swangin’ as the song goes, at least for a little while. The sun decided to chase us in to the house, and Hayward switched his television to something called YouTube, which has assorted true bluegrass videos.

Now I told Hayward he could go to his bedroom, just get me a blanket, since there was a small pillow on the couch, I was staying until next week.

As I was heading home Hayward reminded me that he wanted to take me to the cemetery so I could see his family’s stones, as I can remember the names of several.

The cemetery isn’t that far from Hayward’s house so he decided to take his golf cart. Oh how I wish there had been a video so everyone could hear me laughing. Hayward was laughing too at my silliness, and enjoyment of riding on the golf cart.

It only took a few minutes to get to the cemetery. The first stone I observed was so touching, as it read Hayward, Kim and Vivian. I must admit I wasn’t prepared to see that. Vivian was such a wonderful person and made Hayward and the family complete. As Hayward drove through the cemetery it was like reading a book, as I remembered so many names of his family from hearing Mommy talk of them.

Actually I met J.D. Calihan who was married to Wanda Hogg. Wanda is the daughter of Vernon Hogg, and a sister to Shirley Gentry and Jim Hogg.

A year ago along with others, I never thought Hayward Day would ever pull through the horrible health ordeal, much less be walking, back to driving and especially out driving a golf cart.

Now for your laugh, I called Ann Calihan saying I had occasionally gone out to eat, even to a music event with a man in my lifetime. However this is the first time I’ve ever had a man ask me to go on a ride golf cart through a cemetery.

If Vivian can smile in heaven, I know there was a big smile on her face. For you see this family is part of the Calihans which aren’t blood relations. They are still my family and treat me like a part of the family. Yes, I came home, no I didn’t stay a week.

Sunday was Old Time Fiddlers, which meets first Sunday of each month; this was an exception because of Labor Day. I’ve written so much about the Mountain Minor movie, some may actually get tired of me writing about it. Old Time Fiddlers members are Warren and Judy Waldron, who have belonged to the club about forty years or more. Warren and Judy also performed in the Mountain Minor movie.

Sunday we had some very special guests to join the group, who performed in Mountain Minor. A couple guests have played in different bands also, Ma Crow, Warren Waldron, and Dale Farmer, who produced and directed the movie. Judy Warren had a cut finger so she actually just enjoyed the music.

Are there were Vicki Abbot, who plays bass for Ma Crow & Company, and John Schneider who is a multi-talented singer and plays different instrument. John has performed in several bands.

Without James, Marilee, Warren and Judy along with John Steuver O.T.F wouldn’t exist.

An O.T. F. member Marilee Ege had an accident as she fell crushing the bones in her right arm.

Another O.T.F. member had to miss due to a recent visit to the hospital with blood clots in the lungs and legs.

This was a wonderful, eventful time at Old Time Fiddlers. There was a pot of fresh hot potato soup and a pone of cornbread, along with other things to eat.

Saturday, my daughter Angie and my thirteen-year-old grandson Bennie Wiederhold finally got moved into their new apartment in Harrison, not far from me.

Hello Mike and Marcia Caudill, I am still looking forward to try to make it to the mountains before winter.

Hello Les and Pat Wagner, and all the family.

Buddy and Bernice Grubb, you better believe if I head for the mountains I call home, I am coming to visit carrying a small basket with a handle. I am coming prepared. You are starving me to death with jars of pickled corn, mixed pickles, with me knowing it would probably be the death of me eating this delicious food.

There’s much more I would l like to write, I am once again having stomach issues, and I am struggling with this computer.