Oh how I love our family and the precious, special times we can get together with our Mommy. Mom had all five of us kids in six and a half years. So, you talk about close we were. When we were growing up we never were without someone to play with; sometimes we were in each other’s face more than we wanted to be. I think we love and understand each other more now than we did then. I wish all families could get along and love each other as much as we do.

On that note, we surely did miss our brother and his family during Thanksgiving this year. They live in North Carolina and have an eight month old granddaughter that was sick, so they weren’t able to make it this year. We were disappointed, but I think Mom was even more disappointed than we were.

We had a headcount of 20 but we usually have more than 30. Those that could make it besides myself and my husband were Delores Tacket Holbrook, Lucille Tacket Graves and her daughter Karen Graves Barger, her husband Jamie Barger and their two children Ava and Silas, Lucille’s youngest daughter Lydia and her friend Justin Robinette, Charlene Tacket Mason, her husband Rick Mason and their daughter-in-law Chasity Watts Mason (Charlene’s son Blake Mason had to ref a game), and their two kids Tucker and Chesnee, our daughter Joy Yonts Hampton, her husband David Hampton and their three children Seth, Drew, and Story. 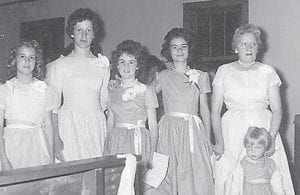 My husband and I got started talking to Mom about their Thanksgiving dinners growing up and how different they were from now. She said she really can’t ever remember them having a turkey but instead they usually killed a hog around that time and probably had fresh hog meat. They didn’t have electricity so the meat was salted and hung up to preserve it.

Another staple they kept on hand was pickled corn in a crock. She said it was field corn that was put in the crock and covered with water and salt. Then a feed sack was placed over it and a rock placed on that to keep the corn down in the brine. I asked her about how big the rock had to be to put on a crock that size and my husband explained it was field corn so it wasn’t anything like the size of our sweet corn we grow now. So, when it’s placed in a crock and stacked in there you could put one rock in the middle and it would keep the corn pushed down.

My husband’s mom always had pickled corn like this too, so he knew what she was talking about. As a matter of fact Evelyn gave us their crock and I love looking at it and remembering how much it meant to them. But, anyway they said it would form mold on top of the brine and you would push that layer of mold back and get you an ear of corn and then the mold would go back into place or form new mold. Then you had to wash it off and you could just eat it for a snack or cut it off the cob and serve it with your meal. Mom said her sister Margie loved it so much. My husband said they had to sneak and get theirs because his mom didn’t want them eating it all up.

There was also a special Thanksgiving dinner at the Letcher County Senior Citizens. We all brought food in for our potluck dinner. Loved, loved being able to socialize and eat with everybody. So many people were missing though. Just to name a few Faye Mullins, her sister Elsie, and her son David Mullins were three that we got close to and they now have other obligations and can’t be there at all. Pat Wright had a doctor’s appointment. Ed and Betty Jo Pike haven’t been there in awhile because of her knee problems. Lelah Adams Dixon comes in every once in awhile but wasn’t there Monday. Juanita Banks went to spend some time with her daughter for Thanksgiving. Just want you all to know we missed you.

Lizzie Mae Wright is one of the seniors that Mom and I love talking to. Mom says she sure is interesting to talk to. I got her to tell me some of her past. She said she first saw her husband, Melvin Wright, when he was working to help cover her mom’s house and it was love at first sight. She was 15 years old when they married. He was in the Army from 1942 to 1945 and then he went to work at the Dr. Pepper plant (I didn’t even know there was ever a Dr. Pepper plant in Whitesburg), where the Appalshop shop is now. They rented a two room house at Apex for $20 a month, which I would say was a lot of money back then and as hard to pay as any rent today. They lived there for three months and then moved into a house her family owned in Holbrook Town. As of now she has lived in every house but one on that road in Holbrook Town.

Melvin was saved and joined the Old Regular Baptist Church in 1948 and then she joined in 1949. Melvin and Robert Wagner were both ordained at the same time.

She told us she had a wonderful surprise the other day when three of Paul Holbrook’s daughters came to the cemetery to decorate their daddy, Paul Holbrook’s, grave. The cemetery is close to her house so they came over and talked with her for awhile. She said two of them are from Florida and one is from Georgetown. They are her cousins.

Speaking of cousins, one of mine, Kim Lucas, messaged me the other day and said she had something she thought I would love to see. She had diplomas that were her dad’s and another one that belonged to our uncle, Hugh Watson Pennington. And she also had an old, old composition book that was our Papaw Henry Pennington’s time book. It has his time that he worked in the mines and how much coal was hauled and his pay. Also, what he bought at the store and the cost and some entries of scrip spent. Then, on over in the book he started keeping his son Merril’s information too. He came home from the war and went to work at the company store at Marlowe.

You talk about something interesting to look at and wonder over, thank you so much, Kim, for thinking of me. My sister Lucille loved looking at it as much as I did. She had some different ideas about some of the information in it than we did. I would love to have someone look at it that knows more about than we do. We’re talking about in the 1930s. Can you imagine how different their life was from ours now and how different our grandchildren’s will be from what ours was?

Don’t forget to keep praying for my aunt, Linda Hall. She is still at Letcher Manor Nursing Home. My mother in-law, Evelyn, is doing about the same and doesn’t seem to have any heart, blood pressure, breathing or diabetes problems now. Also continue to pray for our pastors and their families. My pastor, Bill Jones, and his wife are going through their second year of holidays without their son Bobby Jones. Mom’s pastor, Bill Craft, and his wife need our prayers for their health. My aunt Pearl Pennington Noble’s family really need our prayers, too. This is their first year without her. She was near and dear to our hearts and I miss her daily at the rec center. My granddaughter, Story found a piece of the candy she used to give everyone. Story always called it Auntie Pearl candy. When she found it she got really sad and I said, “You always did love Auntie Pearl candy, didn’t you?” She said, “Yea, but mostly I just loved Auntie Pearl.”

Ending here again as Oma always said, don’t forget to attend church somewhere this Sunday and I say if your church has services Sunday evening and throughout the week God would want you there then, too.