Oldest man in the U.S. dies in California at 112 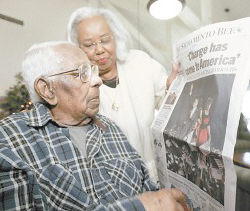 George Francis, the nation’s oldest man, who lived through both world wars, man’s first walk on the moon and the election of the first black president, has died. He was 112.

With Francis’ death, Walter Breuning of Montana, who is 112 years, 98 days old, becomes the country’s oldest living man. At 114, Gertrude Baines of Los Angeles is the nation’s oldest living person. The world’s oldest person is Maria de Jesus of Portugal, who is 115 years, 109 days old, and the oldest man is Tomoji Tanabe of Japan, who is 113 years, 101 days, Coles said.

Francis, who at his prime barely weighed more than 100 pounds, was born June 6, 1896, in New Orleans. As an African- American in the South, he felt the sting of the Jim Crow-era segregation laws in his early life.

His son said Francis tried to enlist in the U.S. Army during World War I but was turned down because of his stature.

“We always attributed his longevity to his mental and physi- cal toughness,” Anthony Francis said.

George Francis quit school after the sixth grade, became an amateur boxer as a young man and later worked as a chauffeur, an auto mechanic and a barber.

He and his wife, Josephine Johnson Francis, had a son and three daughters. Josephine Francis died of cancer in 1964.

Even in his waning days, Francis never lost his passion for politics, his family said. He voted for Franklin Roosevelt in the 1930s and for Barack Obama in 2008.

In an interview with The Associated Press after Obama’s victory, Francis, who used a wheelchair, said he felt like jumping up and down.

Anthony Francis said his father was devoted to his family and that he attributed his longevity to them.

“He said ‘My children and my friends, I live off of them,'” he said.