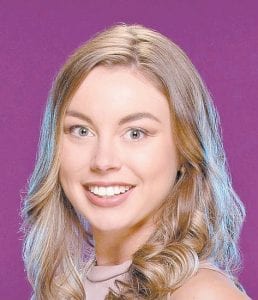 Whitney Hog g , o f Whitesburg, is now appearing in the streaming version of the CBS reality series “Big Brother: Over the Top.”

The weekly series, which began airing online September 28, stars 13 houseguests competing for a grand prize of $250,000. Each week, a houseguest is eliminated based on competition and, eventually, America’s vote. The series can be found online at CBS.com. Viewers must subscribe to the allaccess version for $5.99 per month to view the series.

All-access grants viewers the ability to watch the house 24/7, view weekly episodes, and vote to keep competitors in the house. This spin-off of the original TV series will stream entirely online and live for the next 10 weeks.

Hogg attended Letcher County Central High School and graduated from the Southeast Community and Technical College’s Medical Assistant program last November. She was a huge fan of the program while growing up and seized the opportunity to audition this past spring in Lexington. Weekly episodes that reveal the eliminated houseguest will stream on Wednesday nights. So far, Hogg has been a star in the house, reflecting her southern charm and traditional values.