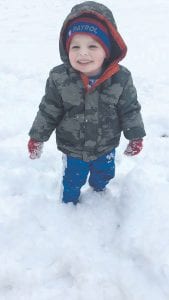 Two-year-old Andrew Miller was all smiles while he played outside in the snow on January 23. Andrew is the son of Tim and Susan Miller of Whitesburg. He is the grandson of Tick and Diane Lewis of Whitesburg and Jessie Miller of Jenkins and the late Yvonne Miller.