On the hunt for marijuana 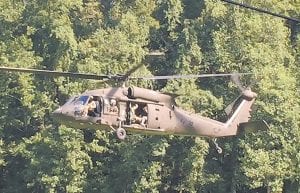 Officers with the Kentucky State Police Cannabis Suppression Program teamed with the Army National Guard last week to identify and destroy marijuana plants found growing illegally. This helicopter carrying team members landed at Thornton on the afternoon of August 4 and destroyed two plots of pot they had spotted while flying over the area. No arrests had been announced at presstime. Last year, the Cannabis Suppression team destroyed 6,600 plants found in 105 plots. (Photo by LaRanda Baker)