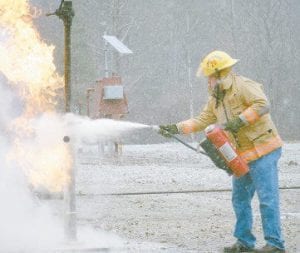 Letcher County Judge/Executive Jim Ward learned what equipment to use and the proper way to extinguish a natural gas pipeline fire during a class held December 6. Members of Gordon, Sandlick, Whitesburg, Colson, Jenkins and Neon fire departments, along with the state fire marshal’s office and Letcher County Emergency Management Office, participated in the class sponsored by natural gas producer Equitable Resources Inc. The first part of the day was spent in the classroom and the second part was at one of the company sites where Equitable had set up a controlled fire.