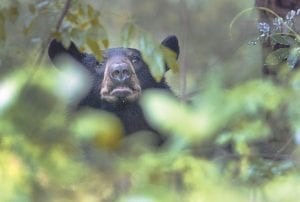 A black bear took a break from a chase Monday after being tracked for hours through subdivisions in the City of Ashland, about a two-hour drive from Letcher County. Ashland police and animal control officers called in a wildlife biologist from the state, who said the bear had done nothing to deserve being trapped. The bear was still at large Tuesday. (AP Photo/The Independent)