On tour with Kenny Chesney 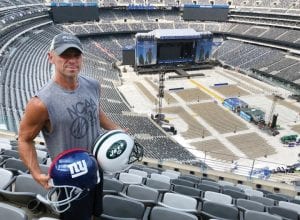 Country music star Kenny Chesney spends up to three hours on the stage performing a collection of hits pretty much unequaled among contemporaries in any music genre. (Essential Broadcast Media)

The wave of sound builds from the bottom of the lower bowl to the very top of MetLife Stadium. Every seat is filled, and the place rocks with energy and anticipation.

Indeed, it couldn’t be any louder if the Giants or Jets were playing in a Super Bowl there.

Except there’s no football game about to kick off. It’s one of 14 NFL and 19 overall stadium stops for Kenny Chesney on his five-month, 42-show “Trip Around The Sun” tour earlier this year. And the musical magic about to be created rivals anything the place has ever seen.

For country music’s biggest star — Chesney is the only country act in Billboard’s Top 10 touring artists of the last quarter-century — and a nominee for a ninth Entertainer of the Year honor at this week’s CMA awards show, the marriage of music and sports is a natural.

“When I was growing up, I had two passions: sports and music,” Chesney says. “They were things that made you feel even more alive, and they lifted you up. It was almost hard to separate the way playing football made you feel from how being at a great concert was. Music is such a primal force: it’s inside us, without thinking.

“I think playing sports is the same way. How you feel when you’re on the field, that immediate rush is the ultimate high. When I started playing for tips and burritos at Quarterback’s, it was the same thing — only less intense, because there were so many variables. But as time went on, as I learned about writing songs, really dialing in on life and performing so I know I’m reaching people at the back of the room, that intensity of how it feels when it’s right became the same thing. When the drum kicks, the lights start and you can hear the crowd even before the curtain falls, it’s like that first play of the night. … It’s on, and there’s nowhere in the world you’d rather be.”

Chesney spends up to three hours on the stage performing a collection of hits pretty much unequaled among contemporaries in any music genre. It’s an exhausting trip for virtually everyone: band members, stagehands, crew and, of course, the audience. And it’s worth every second.

NFL games generally last about that long and can create the same aura.

“If we do it right, hopefully we wring every spec of energy out of the fans,” Chesney explains. “Sometimes you can feel a slight ebb during the last song. But what’s more likely to happen, the energy feeds itself, so by the end, they’re hitting a whole other plateau. They may sleep til 2 the next day, but they’re bringing it hard, and they’re not quitting.

“Honestly, it’s part of how the band and I can also build our energy: No Shoes Nation feeds us. We go out to give them absolutely everything, but I always say, they give us more than we give them.”

Robert Kraft would agree. The owner of the New England Patriots is a certified member of No Shoes Nation. He has had a special relationship with Chesney since 2005, when the first of 19 concerts at Gillette Stadium took place.

“Kenny’s music is truly one of a kind. It has this unique and special quality to it that takes people to a place where they can forget the day-to-day worries of life and enjoy the moment, whether in the car listening to the radio or in stadium full of people singing along. When you see Kenny live in concert, his personal energy and charisma is like no one else,” Kraft said. “He brings you into the melody and the moment, and it takes those feelings to an entirely different level. After 14 years and 19 shows at Gillette Stadium, I continue to be blown away by the way Kenny and his music affects people. It truly is one of my favorite scenes, seeing 60,000 happy, glowing faces taking in the timeless greatness that is Kenny Chesney.”

Chesney is the biggest ticket seller for any musical genre at MetLife Stadium, where Bruce Springsteen, Bon Jovi and Taylor Swift have been regulars.

Chesney has not committed to another stadium tour. In 2019, he is planning a more intimate series of concerts. But perhaps the unforgettable vibes from the previous concerts will lead to another Trip Around the Sun.

Regardless, Chesney and No Shoes Nation have proven the bond between music and sports is unbreakable.

“I love football, and the discipline that goes into playing it,” he says. “I’ve been lucky to be friends with Sean Payton, the Manning family, Drew Brees, a lot of those guys, not to mention so many people a casual fan might not know. I’ve been to practice; I’ve been to games. I still get a little amazed that I know every inch of a lot of these buildings I see on TV every week, because I stopped growing in the ninth grade, and that was the end of any dream of playing sports for a living.

“When I think about that, or when I’m onstage, and looking all the way to the top, it’s a pretty unbelievable feeling. All those games, all that energy, and we get to be part of these places in a way that’s just as passionate and intense in a whole other way. It reminds me how powerful music can be.”