Once an East Jenkins landmark 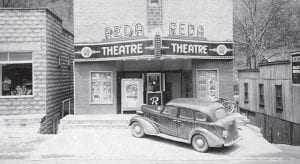 The Reda Theatre in East Jenkins is seen in this photo shortly after it was remodeled in January 1948. The theater, originally opened as the Rex Theatre, was part of the Reda Brothers Amusement Company chain that also operated movie houses in the towns of London, Middlesboro, Richmond, Pineville and Vicco. A report appearing in the January 15, 1948 edition of The Mountain Eagle said, “The Rex Theatre located in East Jenkins is now under new management and assumed the new name of ‘REDA.’ Many improvements have been made. The Theatre is owned by Mr. and Mrs. Bellante of East Jenkins.” The photo seen above appears on several Internet web sites, including one operated by the Jenkins Independent School District. It carries the copyright “2008, Mary Ann Infantino” on another site.