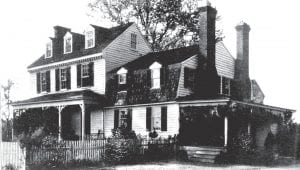 Cloverdale in 1935. Boyhood home of late Letcher County physician Thomas R. Collier, was torn down in 1955.

the December 1, 1955 edition of The Mountain Eagle was a photograph and short report detailing the announcement that the historical boyhood home of Whitesburg physician Dr. Thomas R. Collier in Hampton, Virginia would soon be torn down.

The house, known as Cloverdale and located on the Cloverdale Plantation in Hampton, Virginia, was believed to have been built sometime before 1676. The property is now controlled by the National Aeronautics and Space Administration (NASA).

At the time the demolition plan was announced, Dr. Collier was still among the best-known local physicians, having been present for the births of many Letcher County children since he began practicing medicine here around 1919.

In May 1931, The Mountain Eagle reported that Dr. Collier came to Letcher County after falling in love with its mountains at first sight, then “began practicing his profession in this county at Elsiecoal [now referred to as Premium or Hotspot], where he built up a large practice of that section’s most prominent citizens.” 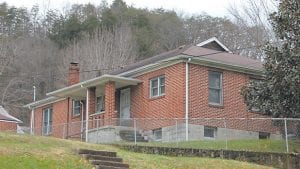 This house that Dr. Thomas Collier built in Whitesburg in the early 1930s is now the “manse” for the Graham Memorial Presbyterian Church.

“When Elsiecoal lost its prestige as a coal mining center,” The Eagle’s 1931 report continued, “Dr. Collier and family located in Whitesburg, and are now among the most popular and well known citizens. This year, Dr. Collier has built a modern home in the Letcher Heights [Back Street] section of the city and is soon to occupy it.”

Dr. Collier died here in 1957. His widow, Ruby Jones Collier, died in the Whitesburg home two years later — in August 1959 — after a long illness. She was only 45 and left behind two daughters who still lived at home, Margaret Faye Collier and Rosemary Collier.

In January 1960, about four months after the death of Mrs. Collier, the house Dr. Collier had built in 1931 was purchased by the Graham Memorial Presbyterian Church in Whitesburg — and is still being used as the church’s “manse.”

The Eagle’s 1931 report appeared shortly after the death of Dr. Collier’s father, Howard F. Collier, in Hampton. The report said — and a recent article from NASA that appears below confirms — that Dr. Collier was “a member of one of the oldest and best families in the old eastern section” of Virginia.

The following history of Cloverdale (the house and plantation) appears on a NASA website (crgis.ndc.nasa. gov/historic/44HT0045#Cloverdale_ House). The Langley Research Center was formerly known as Langley Air Force Base.

The Cloverdale Plantation was derived from portions of the Moorefield Plantation, the Chesterville Plantation, and the William Moore Tract by James M. Vaughan and his son Robert H. Vaughan. The complex nature of obtaining documentation dating as far back as the early 1600’s and tracing the ownership history of any property that resided formerly in Elizabeth City County, now Hampton, can prove problematic. Despite these challenges, it is possible to reconstruct a general outline of the history of Cloverdale from the initial settlement in the area, through the Civil War, and ending with the demolition of the house in 1955.

The rich, historical nature of the Cloverdale Plantation is shown through the very essence of its background. Originally, the English Crown granted part of what developed into the Cloverdale property to Thomas Garnett. The Crown granted Thomas Celey land, later incorporated in the Cloverdale property, upon his coming to America in 1611, as well. Thomas Celey later sold the land to Major William Wilson on July 31, 1695. The heirs of William Wilson then married the Smiths, who married into the Vaughan family; thus, the land stayed within family ties until 1879 when it sold to the Schmelz family. Nonetheless, the land obtained by Thomas Garnett, thought to have made up part of the Wythe estate, was the first land in the area to be patented having taken place in the year 1635. The land granted to Garnett resided, “bounding upon Dictoris Christmas, East upon the head of Little Poquoson Creek, Southwest into the woods, and due West upon George Hull his ground …” During the same year, John Moore obtained land, “lying and being North upon the Little Poquoson Creek, East butting upon the land of Thomas Boulding, West upon the land of Thomas Garnett, and running South into the woods toward the head of broad Creek…”

Forty-one years later, Thomas Wythe Sr. had purchased an unknown acreage of this property, and gave his daughter, Constant Wythe fifty acres upon her marriage to John Tomer, who likely built the first house on the tract. By 1676, the Cloverdale Plantation house, situated on the William Moore Tract, remained under the ownership of the Wythe family until 1735 when the Moore family gained possession.

In 1735, Augustine Moore purchased 50 acres of land from James Tomer, the grandson of Thomas Wythe I and son of John Tomer and Constant Wythe. The home stayed in the Moore family for roughly 35 years. The addition of four more rooms onto the house, situated on the tract, occurred two years following. In 1747, Captain Augustine Moore bought the Tomer land, and his nephew, Augustine Moore, inherited the property that same year. In 1782, Augustine’s oldest son, William, maintained ownership of record for the tract and the thought that William built the Cloverdale Plantation home remains a common conception. William grew grain, had five horses and 48 head of cattle, sixteen slaves, and an overseer for the farm. Upon his father’s death in 1795, William moved to his father’s 200-acre farm (the Moorefield Plantation) and his brother Augustine Moore inherited the 50-acre tract.

Documentation, in the form of deeds, shows the transfer of land, in 1804, from William Moore to Augustine Moore Jr. and seven years later, in 1811, a transfer from Augustine Moore Jr. to James M. Vaughan. Then, in August of 1816, James M. Vaughan purchased the 50 acres making up the Moore Tract. He inherited 550 acres of land in 1819, along with part of Chesterville from Houlder Hudgins. In 1830, James M. Vaughan inherited Cloverdale from his fatherin law Houlder Hudgins and added the two and one half story addition to the original, colonial plantation home.

Upon James’s death in 1850, Vaughan’s son Robert H. Vaughan inherited Cloverdale and making it his home, lived with his wife, Lavinia C. Vaughan, their six children, and their overseer John Dillard. The plantation contained 54 slaves, ages 1-70, who farmed 400 of the 600 acres that made up the plantation. Additional tracts acquired by Robert established the estate known as Cloverdale. The house located on the tract gained an additional five rooms one year later.

In 1856, Vaughan died and his son James Vaughan inherited the property. James Vaughan moved into Cloverdale with his wife and children. James died in late 1866 or early 1867, without a will. As a result, the Chancery Court ordered the property auctioned and in 1874, Francis Schmelz purchased 300 acres including the Cloverdale house for $3,400. In 1878 Schmelz and his wife Angelina gave the tract to their daughter Nannie Belle Collier and her husband Howard F. Collier, along with another portion of the Vaughan estate known as School Neck. Furthermore, the 1878 marriage between Nannie Belle Schmelz and Howard F. Collier first linked the lines between the Schmelz and Collier families. In 1942, National Advisory Committee for Aeronautics (NACA) obtained the Cloverdale tract from the Colliers, and the house was used for an activities center until dismantled in 1955. The land making up the Collier estate now remains a part of the Langley Field.

The site of the Cloverdale Plantation house, now referred to as “Colonial Grove,” serves as a recreational area comprised of a few large trees that remain survivors of the Colonial period. In 2003, during hurricane Isabel, several of the trees became uprooted and were consequently lost.

The artifacts found during archaeological surveys completed of the Cloverdale estate totaled 1,920 and included such items as ceramics, pipes, and small pieces of toys. Moreover, a recommendation has been made to include this site on the National Register of Historic Places due to its association with both the history of slavery and land development in the area. A historical marker displays the history of this area dating back to 1635.