‘Once Upon a Time,’ ‘Portrait,’ are top picks 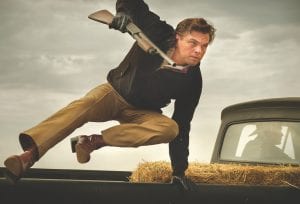 This image released by Sony Pictures shows Leonardo DiCaprio in Quentin Tarantino’s “Once Upon a Time … in Hollywood.”

1. “Once Upon a Time…in Hollywood”: Quentin Tarantino’s movie business fairy tale, featuring all-time performances from two of our great living movie stars, and the shadow of one’s spirit, is his most warm-hearted and tender and a complete joy to watch and watch again. It’s hard to glean whether a film will stand the test of time, but “Once Upon a Time…” has the makings of a modern classic.

2. “Little Women”: For a story so rooted in its post-Civil War time, it’s an astonishing feat that Greta Gerwig was able to make “Little Women,” a book with no shortage of adaptations, into something that’s downright modern. With an eye toward warm details and sharp dialogue, Gerwig, along with a terrific cast, makes the maturation of the March sisters more than just wistful nostalgia, but an urgent piece about the economics of being a woman and the worthiness of their stories.

3. “The Farewell”: In an industry that favors safe bets (and fewer and fewer of them at that), it’s no wonder that a batch of smaller, intensely personal films stood out in 2019. But Lulu Wang’s “The Farewell,” a sensitive and wry account of the time her family decided to not tell her grandmother that she was dying of cancer, is at the top of the pack. Not only did we get to see Awkwafina in a different light and meet the phenomenal Chinese actress Zhao Shuzhen, but see ourselves and our own relationship with death and grief in the specificity of a different culture.

4. “1917”: The whole “one take” construct of Sam Mendes’ sumptuous World War I epic “1917” is a neat trick, but that alone isn’t exactly a reason to see it. In fact, “1917” works so well because you’re so wrapped up in the story of this impossible, real-time mission across across No Man’s Land. Soldiers desperately race to stop an attack that the British have learned is doomed to fail. Immersed in their frantic sprint, you don’t even notice the gears behind the engine.

5. “Marriage Story”: The ugliness of the modern divorce industrial complex gets an achingly human face in Noah Baumbach’s tragicomic “Marriage Story,” which although it’s about the dissolution of a marriage is one of the funniest and most alive perhaps because it is so real — not to mention the wonderful turns from Scarlett Johansson, Adam Driver and a crackling supporting cast.

6. “Maiden”: A hidden gem of a documentary, “Maiden” is an exhilarating and uplifting adventure film about the first all-female crew to compete in a ‘round the world yacht race with harrowing archival footage and terrific present-day interviews with the women who raced and the men who doubted them.

7. “Honey Boy”: I’d wager that the biggest sell of “Honey Boy” is also its biggest deterrent: That it’s Shia LaBeouf’s story. For those in the latter camp, I have one thing to say: See it anyway. This is a lyrical and immensely moving portrait of a child actor (Noah Jupe) and his complex relationship with his toxic father (LaBeouf) and a stunning fiction debut from director Alma Har’el.

8. “Parasite”: Writer-director Bong Joon Ho keeps the audience guessing in this twisty, comedic and trenchant film about two families — one working class, one wealthy — whose stories become intertwined in a modernist palace. It’s a film that should be seen knowing as little as possible, but also one that gets richer with every view.

9. “Joker”: Was “Joker” an agent of chaos? Sure, but not in the way people suspected. It didn’t incite violence; It was simply successful. And that’s not a bad thing! It’s a sneakily elegant film that dared to make something serious and adult out of a comic book character.

10. “The Nightingale”: Jennifer Kent’s harrowing film about a young Irish woman on a quest for revenge in 1825 Tasmania contains one of the most shocking depictions of violence I’ve ever seen — so disturbing that I found myself looking for the door — and yet her film, which wants the viewer to be challenged by its violence, hate and ultimately empathy, is one that not only provokes, but sticks.

1. “Portrait of a Lady on Fire”: In a year defined by mammoth masterworks, nothing took my breath away like Celine Sciamma’s exquisite, soul-shattering romance. A female painter (Noémie Merlant) in 18th century France is sent to paint, on the sly, the portrait of a spirited noble woman (Adèle Haenel) before her arranged marriage. The movie assembles itself as a series of stolen glances, as art and love mingle for a blissful but tragically unsustainable moment. The parting shot, a kind of portrait itself, is a devastation I won’t soon recover from.

2. “Rolling Thunder Revue” and “The Irishman”: A simply astonishing double feature from Martin Scorsese, one consumed with life, the other with death. Scorsese spoke urgently and eloquently about how movies should be more than they often are: a corporatemade product with little of the humanity that makes films worth debating, worth loving. But as well and as passionately as Scorsese argued for cinema, nothing made his case better than these two remarkable, colossal films.

3. “Honeyland”: Directors Tamara Kotevska and Ljubomir Stefanov were initially commissioned just to make a video about nature conservation in Macedonia, about one of Europe’s last wild-beekeepers. Instead, they spent three years and collected more than 400 hours of footage with Hatidze, a heroically indefatigably middle-aged woman who lives in an abandoned rural village in North Macedonia where she ekes out a meager living for herself and her bedridden mother by sustainably harvesting honey. The filmmakers whittled their footage down to a 85-minute fable of startling intimacy (the candle-lit scenes of Hatidze and her mother are among the most stirring you’ll ever see) that reverberates with larger ecological allegory.

5. “Marriage Story”: Noah Baumbach, too, is working at the very top of his game, telling a delicately, even profoundly constructed tale of divorce — a subject not so easy to be clear-eyed about — with a miraculous steadiness and compassion. For a horror story — and with lawyers breathing fire and brimstone to go with it — it’s remarkably funny, tender and true. A deeply humane masterpiece.

6. “Pain and Glory”: A master filmmaker looks back, rewarding us with one of his richest and most luminous films. Pedro Almodovar’s warm spirit vibrates throughout this time-skipping drama of self-reflection. Almodovar has never felt so close at hand, and the film’s final image is one of poetic summation.

7. “Little Women”: Greta Gerwig’s Louisa May Alcott adaptation is a feast of a movie. Every frame is alive. By remixing the book’s timelines and expanding Jo’s arc to encompass Alcott’s, too, Gerwig hasn’t just made “Little Women” contemporary, she’s made it sing.

8. “Once Upon a Time … in Hollywood”: Quentin Tarantino has said he aims to retire after making 10 films; he’s disinterested in becoming an old filmmaker or doing anything to dull the vibrancy of his earlier films. He should rethink that. His radiant and poignant 1960s Hollywood fable suggests that Tarantino, when he slows down and soaks up the California sun, can be even better as he grows older.

9. “Last Black Man in San Francisco”: An almost-too-beautiful fable of displacement and gentrification that ultimately wins you over with the sincerity of its anguish and the soulful performances of Jimmy Fails, Jonathan Majors and Rob Morgan.

10. “ Atlantics “: Writer-director Mati Diop’s feature debut is preternaturally assured. It’s a ghost story, set in Senegal among grieving women after a boat of emigrating young men has disappeared into the sea. The film’s mythic power is heightened by Diop’s already fully-formed cinematic language.